Who is the Most Tattooed Man in the World? 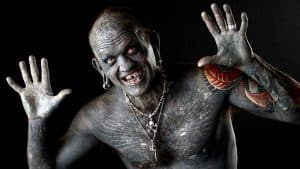 Meet Lucky Diamond Rich who, according to The Guinness World Records is THE Most Tattooed Man In The World!

He started off with colorful designs from all over the world, then not content with that, he went for 100% black ink coverage which included all parts of body – yes I did say ALL parts of his body!

Now, not content with that he has added more white tatts on top of the black and then more colored inks on top of the white – so far it’s taken 1,000 hours and counting. He’s welcome to have the record for being most tattooed man in the world if you ask me!

See what he says in his own words from the official Guinness World Records 2011 vid:

Where does the world’s most tattooed man live?

He’s proving a bit difficult to track down in 2017, the most recent article I can find about him is from August 2016 where he is living in Melbourne, Australia and helping out a mate at his tattoo shop.  Apparently Lucky comes from New Zealand originally and is an expert circus performer who travels all over the world.

Who Are The Top Five Most Tattooed Men?

As mentioned above, we know the answer to this one, it’s Lucky Diamond Rich! 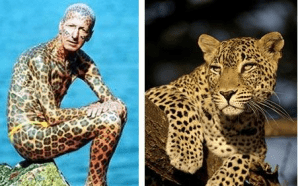 The ex Guinness World Record Holder is a guy called Tom Leppard aka The Leopard Man, this dude is my personal favorite, check out his inks.

IMHO, this has more meaning and a certain elegance – Tom has a cool story too, he lived as a hermit on a remote island of Scotland and died at the grand age of 80.

Oh yeah and he was obsessed with leopards (ya don’t say!) 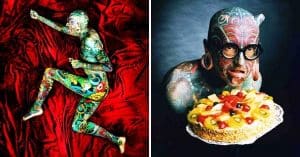 Then we have a Swiss guy called Etienne Dumont – well I suppose at least he is colorful!!

This dude is an art critic and describes himself to be a ‘living art’. If you take a close look he also has silicone implants under his skin. Ugh! 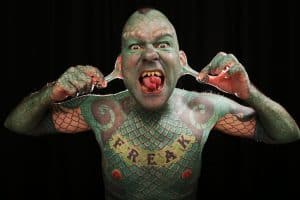 Here’s another guy who has FREAK tattooed across his chest – I couldn’t have said it better myself!

So this one is called Erik Sprague and he decided to become a Lizard! He even chose to have five Teflon implant horns, had his teeth sharpened and split his tongue. 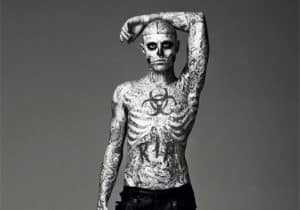 And Finally, in at #5 is Rick Genest from Montreal aka The Zombie Boy. His claim to fame is appearing on a Lady Gaga music vid “Born This Way”

I have to admit I’m a bit weirded out after finding these guys – could be the stuff of nightmares OR do you think it’s ‘art’?

I’m off to find myself a tasty adult beverage, I need one after reading about silicon implants under the skin and Teflon horns (I’m sure Teflon is something I use for non-stick cooking!) In fact, I’m gonna look at some travel ideas too, I play golf (really badly right now), but I reckon that finding a beautiful golf venue will:

A) stop me from feeling so weirded out

B) be a good excuse to have a well-earned break! Check these venues out

Yeah, I know, any excuse right!