Who is the Tallest Man Who Ever Lived? 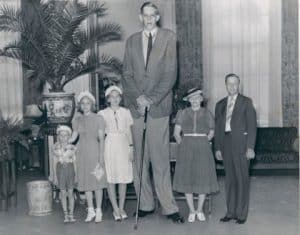 One from the family album of Mr Robert Pershing Wadlow, who is known as The Tallest Man Who Ever Lived (which is verifiable by recorded proof).

Robert reached 8 feet 11.1 inches and he was known as The Alton Giant or The Giant of Illinois.

Sadly, The Tallest Man who ever lived, died when he was 22 and still continued to get taller until his death in 1940. His great size was due to over-production of human growth hormone in his pituitary gland.

Here is his story:

Who Is The Tallest Man Alive Today?

That accolade, in The Guinness World Records, goes to a guy called Sultan Kösen who is 8 feet 2.8 inches. 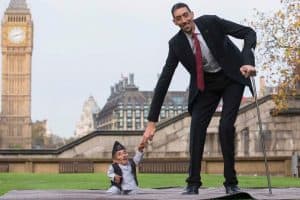 Here is a picture from London, 2014 of Sultan meeting Chandra Bahadur Dangi who at 1 foot 10 inches was at that time the shortest living man (he died in 2015).

Sultan had pioneering gamma-knife surgery in the USA in 2010, which finally stopped him from growing any further. It’s just as well as the human skeleton and heart are not designed to cope with an 8 foot body; and Sultan has had lots of health problems to contend with due to his height. (He has joint problems, has to walk with crutches and has a curved spine too).

Who Is The Tallest Current NBA Player? 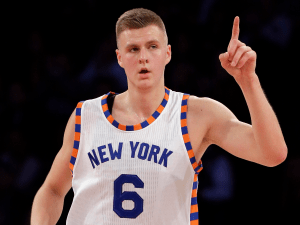 The tallest ever NBA player is reported to be Gheorghe Mureşan his best season was in the 1995-96 campaign when he was named NBA’s Most Improved Player after averaging 14.5 points per game for the Washington Bullets. His promising career was cut short by injuries – it would seem while there are obvious advantages to being tall for basketball, the ‘tallness’ is a major disadvantage in the likelihood of picking up potential injuries and health problems.

Let’s hope this disadvantage doesn’t befall Porzingis and that his career goes from strength to strength. Let’s face it, tallest men or not, we can all get injuries. Knee problems are particularly common, check out our review on knee sleeves, which can really help out – knees (and ankles too), have so much pressure put through them – whether that’s through sport or everyday wear and tear.

And generally, whether you guys are tall, taller or tallest (I’d put myself at ‘tall’ being 6 foot 4 inches) – it’s always a good idea to keep an eye on your body fat to help your bones hold you up as efficiently as possible and if you want to build muscle onto your frame, then I’d suggest getting some help with that too.  My favorite is Mascugen, check out our review here. In fact, at ThingsMenBuy.com we like Mascugen so much that we’ve given it our Seal of Approval.