Who is the Most Pierced Man in the World? 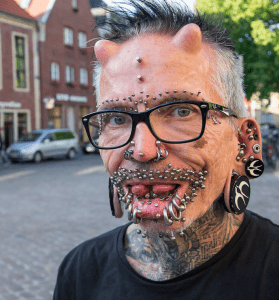 He hears all of the snickering jokes when he walks down the street: “Hey, how do you go through a metal detector?” Or, “Watch out – I have a magnet!”

He sees the looks of shock, the fear in their eyes as they look away, the mothers pulling their children close.

He even gets turned away at immigration when he tries to enter some countries, like the recent experience when he landed in Dubai for a work conference but was told he couldn’t enter for no other reason but his appearance.

But all of this is familiar to Rolf Buchholz, the gentleman who holds the Guinness World Record for being the most pierced man on earth.

This 53-year old German native from the small town of Dortmund, Germany was officially recognized by Guinness in 2012 after they cataloged each and every one of his 453 various body piercings. In fact, Buchholtz got his first piercing only 11 years ago and since turned a hobby into a passion into an obsession into immortal piercing status.

If you’re keeping score at home realize that it doesn’t add up to 453 piercings, you’d be right, because he also has a titillating 278 piercings in and around his genital area!

And if you’re concerned about how randy Rolf can get it on ‘til the break of dawn with the approximately the same amount of metal as the screw section in a hardware store piercing his little Rolf, don’t worry – he says that he still has a normal sex life.

“It’s not a problem at all,” says Rolf, “I have had the piercings already so long, if there was a problem, I would have got rid of them already long ago.”

But despite looking like a circus sideshow, Rolf lives a pretty sedate life, including a good job as a programmer in the telecom industry.

Oh, and before you get warm and fuzzy about his looks, I forgot to mention that he also has tattoos covering most of his body. And two horn implants in his forehead.

So it’s no wonder why officials turned him away when he tried to enter Dubai, albeit for a scheduled appearance at the Cirque le Soir nightclub at a luxury hotel.

“I have two horns. I think that was also a problem for me in Dubai,” said Buchholz.

Just a wild guess that he is spot on.

But the human pin cushion seemed to handle it with a positive attitude, stating “I think if people were a little more tolerant, then the world would be a better place.”

For now, he’ll just have to settle for being the world’s most pierced man everywhere but Dubai. But if Buchholtz has any designs on becoming the most pierced human being in the world, he has a long way to go.

That honor belongs to Elaine Davidson, who has almost 7,000 piercings all over her body and is also recognized in the Guinness Book of Records.

Perhaps they should get together and sparks will fly? Literally.