What is The Best Type of Martini? 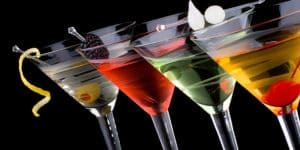 Here’s an interesting question, what’s the best type of Martini? I’ll be totally honest and say that I didn’t realise that there were so many different types until I started having a look around the internet!  I’ve grown up with James Bond movies, so I know what his best type of Martini is, but I had no idea there were so many different martini beverage choices!

I’m gonna take a look at some different types in several blog posts, this article is a general overview of the options of what the best type of Martini could be.  So, let the Martini education begin! Remember if you want to order your martini like a man, check Dave’s post out!

This is created by using olive juice or olive brine to add a salty taste to the classic martini.  It is up to you how dirty you want to make it, the more olive juice, the dirtier it gets.

The Vesper was invented by Ian Fleming, who wrote the James Bond books in Casino Royale which was published in 1953. A Vesper is different to Bond’s usual martini as it contains both gin and vodka, Kina Lillet instead of dry vermouth and a lemon peel instead of an olive.

This one has vodka, triple sec, lemon juice and sugar in it. It is often described as a variant of a vodka martini and is usually served in a glass with a sugar-rimmed edge and garnished with lemon peel.

As well as pomegranate juice , this martini can be made with gin or vodka, with Cointreau or orange curacao and pomegranate seeds to garnish.

The classic James Bond phrase “A Vodka Martini, shaken but not stirred” is one of his famous phrases. After champagne, the Vodka Martini is the drink consumed most by Mr Bond in his movies.

A classic gin martini, garnished with a pickled onion to provide the bitter, salty taste. The ‘pearl’ pickled onion is the preferred choice for the Gibson Martini according to many sources.

I also thought asking for a martini that was dry, meant just that, but apparently it refers to how much vermouth you put into your cocktail. So asking for a dry martini means you want less vermouth and extra-dry is hardly any vermouth at all. The opposite of this then is a wet martini, the wetter you go, the stronger the amount of vermouth you want in it. A perfect martini is equal parts of sweet and dark vermouth with your gin or vodka.

The last two are in here for you guys to impress your friends/girlfriends with you fantastic world knowledge!  Alviero Martini is an Italian fashion designer who is known for his range of Prima Classe products which traditionally feature a “map” motif.

Michael Godard is renowned for his Martini Art, he uses his combination of humor and imagination to create animated olives, grapes and strawberries! Many of his pieces have Martini within their title, for example “She Devil Martini” and “Zen Martini”.

Follow the links to find out more in-depth information on each of our best types of martini and find some great recipes to experiment with, which will be your favorite?