What is in the James Bond Martini? 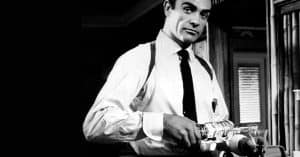 Over the years, 007 has been a hero to many of us, suave, sophisticated and Oh so cool, what more could we want to aspire to!

If you want to drink like a secret agent, let’s find out what is in the James Bond Martini, so that we can all be the spy that always gets the Bond girl of our dreams!

What’s in the James Bond Martini?

There are two types of James Bond Martini, the first and original one that Ian Fleming introduced in 1953 in Casino Royale (his first James Bond novel) is the Vesper Martini.  This was the first time that Bond had asked for a Martini, it is a little confusing as the Casino Royale film that we all know was not made until 2006 and starred Daniel Craig as our inimitable hero. It had in fact been made twice previously but not in the 007 format that we are familiar with these days.

The James Bond Martini which is more commonly shown is a Vodka Martini, “shaken, not stirred”. Here’s a great montage of James asking for his trademark drink (the one that Daniel Craig asks for at the end of the clip is the Vesper Martini which I mentioned above):

A lot of Martini cocktails are made with gin, but Mr Bond prefers his to be made with vodka.

A vodka martini is very popular amongst those who do not want to taste the botanical elements of gin, it provides a crisp, clean taste which many people prefer.  The secret to an excellent vodka martini is the quality of vodka – choose the best vodka and you will be rewarded with the ultimate vodka martini.

Our hero, Mr Bond, first said “shaken, not stirred” in 1958 (Dr No).  Since that time, it has been used regularly in various 007 movies (see our montage above).

Is there any difference in whether you shake or stir your drink? Amazingly, yes there is, apparently shaking a cocktail is best for drinks with citrus or juice in and it also serves to aerate the mix; whereas stirring a cocktail is better if you don’t want to over-dilute, over-cool or change the texture of your cocktail.

Here’s a video from the Cocktail Chemistry Lab which discusses the science of whether to shake or stir:

The picture of walking into a high class cocktail bar dressed in a DJ, sauntering up to the bar and asking for a “Vodka Martini, shaken not stirred” is one that I will try some day, maybe you could too! (especially if you want to hook up with a gorgeous Bond girl!)