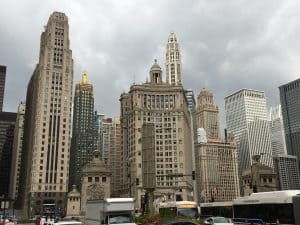 Chicago. The biggest city in my home state of Illinois. Stay tuned, can’t live without more facts from Captain Obvious. Coming right up. Nah. Moving on. I was recently up in the city and some fun was to be had. To be honest, I spent most of my time up there living in “too much fun dot com”. Know what I mean? Did I find some Chicago craft beer? Damn straight I did. Here we go. Well, at least what I remember.

I think I’ll stick with what I did and had to drink the first day and night I was there. That is most clear in my memory. After that, it gets a little bit hazy. This man knows overindulgence personally.

One last thing before we get into it. Chicago is a great city. There’s much fun to be had. If you want to really kill it in Chicago, take a moment to check this out. It will help you have an outstanding weekend in Chicago!

Hanging Around The Magnificent Mile

I was up on the city’s North Side. The Magnificent Mile area. Lots of traffic and lots of people. It’s a big city, go figure. After checking in to the hotel, the first order of business was a late lunch. That had to include two things I associate with the Windy City, local brew, and deep dish pizza. 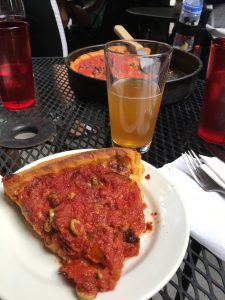 Lucky for me, a Gino’s East location was a short walk from the hotel. Not too busy and, lucky for me, happy hour was just starting.

I have to give this joint some respect. They did not just have the usual pissy looking big corporate beers discounted for their happy hour, they had deals on local beers.

An ESB called Broken English caught my eye. Gino’s, themselves, brewed it so I thought that was a good place to start. The $5 price tag for a pint of craft in this part of the city didn’t hurt either. I was already happy about their happy hour.

Broken English was a fine example of the ESB (English Special/Strong Bitters) style of beer. It was a full bodied ale with a pleasing amber color. Come to find out it was a back to back Silver Medal Winner in 2015 and 2016 at the US Open Beer Championship.

CaraMunich, Challenger, English Marris Otter, and Belgian Special B. English East Kent Goldings hops and malts were used to brew up this well-balanced ale. It looked good and tasted good and I’d have it again.

Broken English bowed in at 5.7% ABV so a pint or two won’t kick your ass all over town.

Next up was Pineapple Imposter.

It was at this point that I finally figured out that Gino’s East was also a microbrewery. Man, I can be dense sometimes. No. Don’t say, “It’s the beer.” It is NEVER the beer. NEVER! Don’t ever bring that up again.

So, Pineapple Imposter was another on-premise brewed beer. English Maris Otter and CaraHell malt rounded out the Centennial and Mosaic hops that filled out this American Pale Ale.

Pineapple flavor was prominent, as the name would imply. Tasted a bit of citrus too. The aroma was a little bit fruit laden without any strong hopness to knock you back. I’d say it was kind of on the lighter side of medium, body wise. Orange tint with a halfway decent head. 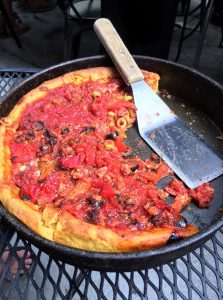 All in all, it was a refreshing APA with a respectable 6.2% ABV.

You know what, the deep dish pie wasn’t bad and wasn’t good. The cornmeal crust was not exactly my thing.

I’d return for the beer, but not for the deep dish.