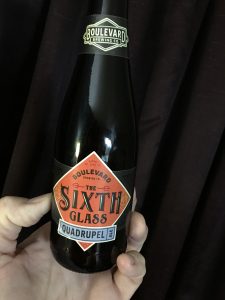 I’m back with more about my drinking craft beer tour. This time I’m in Kansas City. On the Kansas side. Searching for local craft beer. That’s my spare time mission. Finding and drinking new and different craft beers. And writing about it here at The Craft Joint.

Once again, due to a busy work schedule, I was not able to do any brewery tours or visit any brew pubs. Breaks my heart, I must confess. So I had to settle with a beer store. I was running errands after my gig and I thought I spotted a place. I double checked with Siri and I was about two minutes away.

The place was called Tipsy’s. I liked the name, for sure. There was a Harley parked on the sidewalk in front. Had to be an employee’s. I liked that too. I’m thinking I found a good place.

I walked into Tipsy’s and I was impressed. Pretty big place with two big walls of beer coolers! The folks working there were real friendly-always a plus-and I checked out their stock.

To be honest, I probably could have spent an hour there because they had so many craft brews that I was unfamiliar with and that is saying a lot. After reading what seemed like a shit ton of labels, I went the heritage route. With a twist, I might add. 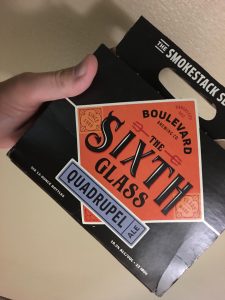 The Quadrupel did the job. Told you I drank ’em all.

Tipsy’s had a whole bunch of beers from the Boulevard Brewing Company. Boulevard is what I consider a heritage craft beer brewery. They have a helluva story too. John McDonald is the guy who poured his heart, soul, sweat, and basically everything he had to get this craft brewery off the ground. After much finagling, grunt work, and determination, he launched Boulevard back in 1989.

He and his team hustled. Boulevard’s Pale Ale was and is a great beer. It became popular. For years that’s all they brewed. They also brewed an Unfiltered Wheat Beer. Those two beers made the company a big success. That’s the way it was. Until 2006 rolled around and things started changing fast.

Boulevard Brewing Company, in 2006, went all in with a $25 million expansion. A new building. In that building they now had a 150 barrel brewhouse, a place for packaging, a place for visitors, and offices.

Because of demand, they focused primarily on the Wheat and the Pale Ale. All their resources went into those two. Well, the expansion meant now they could branch out. Now they could satisfy that creativity that they shelved while they grew. They wanted to brew craft beer that was bigger in flavor and bolder in flavor.

I have to tell, they went balls deep with the variety. I was seriously blown away by all the different Boulevard craft beer. I mean, here I am on my drinking craft beer tour in the Kansas City area and I could not even come close to sampling all the Boulevard Brewing Company beers chilling gloriously in the cooler before me at Tipsy’s.

Catching a Buzz with Boulevard’s The Sixth Glass Quadrupel

What the hell was my thought as I decided to get real familiar with just one. I grabbed a six-pack of The Sixth Glass Quadrupel. Sixth Glass is part of what they call their “Smokestack Series” which embodies the big and bold beer that they are gunning for. 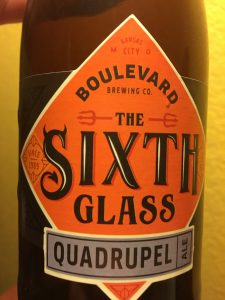 Check out the Devil Horns on the “S” and the tail. Wicked!

The Sixth Glass, I love the devil horns on the “S” on the label, is powerful stuff. It clocks in at 10.2% ABV and has flavor just as powerful. It is a Belgian strong ale. Belgian Ales are what originally got Boulevard’s founder all jazzed up about beer to begin with when he was drinking Belgian ales while on vacation back in the 1980’s.

This potent craft beer has a dark brownish inviting color. The aroma is a blend of enticements. There is a prominent malty sweetness with caramel. I’d say the bitterness is on the lower end of the scale.

I loved this beer and it kicked my ass too which made me love it even more. When you’re drinking tasty craft beer that’s a nudge over 10% Alcohol By Volume, a buzz is sure to happen. I didn’t go hog wild. I knocked back that sixer of The Sixth Glass in two happy craft beer tour drinking sessions.

There will be more Boulevard Brewing Company Smokestack Series in my future pint tipping. That, my friends, I can guarantee.

Next stop on my drinking craft beer tour will be Texas. I can’t wait!