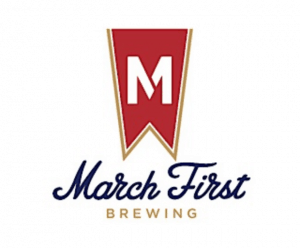 Welcome, my friends, to the craft beer tour that never ends. It is time for craft beer Cincinnati style! I’ll get to this in a moment, but first, let’s recap.

I’m in the midst of zipping around parts of the country for the dreaded “w” word. I’m talking work. Last time I was in Las Vegas for magician work. So, for me, the “w” word is maybe not such a dreaded thing as I enjoy what I do. Plus, the travel puts me in many places and these places have interesting beers and breweries. Sometimes I have time to explore, sometimes I only have time to hit a local beer store for local brew.

While in Vegas, I found Banger Brewing on Fremont Street in Downtown Las Vegas. You can read about this Las Vegas Craft Brewer HERE.

I flew out of Vegas early Tuesday morning, got back to South Western Illinois, and drove to Cincinnati on Wednesday. That’s covering some territory. I had a lot of shit to do, so I could not check out any craft beer pubs or breweries. I did, however, grab a six-pack of some local Cincinnati craft beer.

I spotted some sixers in a convenience store and felt like a porter (dark and frothy?) so I played grab bag and nabbed what I thought was an oddly named locally brewed porter beer with “March First” on the carton. 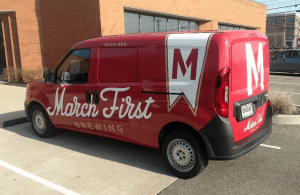 They have a beer van. Mobile Craft Beer!

To be honest, I had never heard of it and I sure as hell didn’t know where the name March First came from, what it meant, what it referenced or anything like that. I can’t even tell you why I ended up choosing it from all the others. But I did and I learned.

The name of the local Cincinnati brewer, March First, is a reflection of the pride that the founders of this brewery have for the founders of their state and for the state itself. The state of Ohio was founded March 1, 1803. They named their craft brewery to honor their state. I think that is both cool and respectful.

The beer I ended up with was their Baltic Porter. This very dark porter kind of confused me as I

drank it. I mean it was really very dark. It had a serious head on it with respectable staying power. Coffee and chocolate flavors were prominent, no doubt. But there was also a sweetish nuttiness to it. None of this was the confusing part.

The confusion came because this deep, dark, rich looking and richly aromatic porter which left serious lacing on my glass did not taste like it should have tasted. Considering everything I just mentioned, I expected a heavy and hearty porter that I’d have to cut through with a hunting knife. Nope. No way.

March First’s Baltic Porter was, dare I say it, light. Yes, light. Not a bad light as just about any and every light beer ever bottled or canned tastes. But it was remarkably light. At first, I thought my tasted buds were all screwed up from jumping through too many time zones and altitudes. So, I drank more. Same thing.

Baltic Porter is a crazy super light on the palate and a little thin tasting, but not in a bad way, porter. I could knock back a whole six-pack and barely notice that I just drank a bunch of 5.9% ABV Cincinnati brewed and bottled porter craft beer. If I did drop all six down the hatch, you can expect that I had a Cheshire cat grin stretched across my face. If I did. Did I? I’ll leave that for you to figure out.