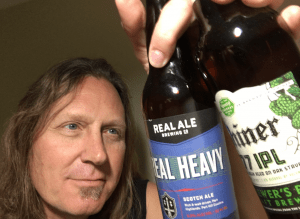 I’m still on the road and I’m still drinking craft beer! Texas craft beer is my focus because I’m in Texas. Makes sense to me. My craft beer tour continues.

There’s a lot of craft beer in Texas. Knowing that blatantly obvious fact, I didn’t try to drink it all. I may like to, I may dream about it, but, well, you know. Instead, I had to focus. Choices had to be made. What to do, what to do.

I decided, for this column, that I was going to focus on two different Texas craft beers. One from the Spoetzl Brewery which is Texas’ oldest independent brewery. Founded in 1909, they are a pretty big outfit. They are the fifth-largest out of all the US craft breweries and rank 10 in size of all breweries in this country. Spoetzl brews hundreds of thousands of barrels of craft beer every year.

The other craft brew I selected was from the Real Ale Brewing Company out of Blanco, TX. Real Ale Brewing was founded in 1996 and has gradually grown into an award-winning craft brewer. They now produce about 60,000 barrels of craft beer every year. 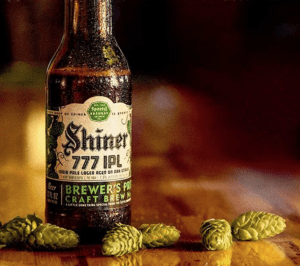 Lucky number 7? The Seven Deadly Sins? The Seven Wonders of the World? What is with all the sevens?

In the case of Shiner 777, the sevens stand specifically for 7% ABV, 70% ABU, and 7 different kinds of hops used in the brewing of this IPL. This is an India Pale Lager, not an ale. Yuengling’s IPL is the only other of this type I’ve had.

Shiner has succeeded in making a beer of this type (either IPA or IPL) that pours with a frothy head that actually lingers! No over carbonation either. The Crystal, Cascade, Nugget, Sterling, Mt. Hood, Golding and Willamette hop medley melded nicely. Even with all these hops, it was not overly hoppy or bitter. There was a nice aroma of citrus and pine emanating from this brew as I poured it. The coppery golden color made it attractive.

I will definitely be drinking more of this Shiner 777 during my next trip to Texas. I found it damn tasty, plenty of hops but not overly fruity sweet and not a ton of bitterness afterward. I could drink a bunch of these in one setting even though the 7% ABV would kick my tail sooner rather than later.

That’s just the price I’ll have to pay. 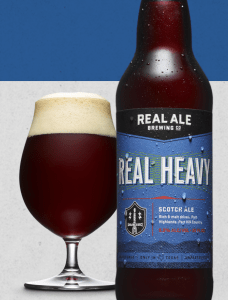 Real Heavy is the name of the Real Ale Brewing company’s 9.3% ABV Scotch Ale. Apparently, there are some heavy metal fans working at the brewery because their website says this is craft beer is “brewed by metal aficionados”. Being a metal fan, I’m not sure the term “aficionado” is something that would be embraced by metal fans but this brew sure as hell is.

Scotch Ales are kettle brewed extra long in order to caramelize the wort. This not only gives this style of craft beer a killer dark color, but the alcohol content gets cranked up too.

Speaking of caramel, Real Heavy’s sweet malty caramel flavors pop right away. Overall, there’s plenty of sweetness in this heavier ale. You also might notice a hint of nuttiness along with just a bit of bitterness at the finish.

This is another winner from a Texas craft beer brewer. I’d like to drink more Real Heavy…really.

That’s a brief look at a couple of examples of craft brews in Texas. Next time I’m there, I hope to dive into more. Much more. It’s my nature. I can’t help it.

More from the road next time here at The Craft Joint.