What Is A Singapore Sling? 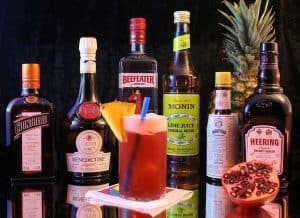 As we carry on with our look at gin-based cocktails, our next question is what is a Singapore Sling?

I have been lucky enough to sample a Singapore Sling at Raffles Hotel, Singapore where it was invented sometime before 1915.

It is easy to sip a Singapore Sling on the balcony of Raffles and imagine yourself in the middle of the High Society of that era! 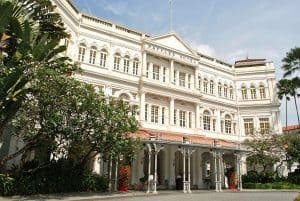 Raffles Hotel is a beautiful colonial-style luxury hotel.  It was occupied by the Japanese during World War 2 and in 1987, 100 years after it opened, it was declared a National Monument by the government of Singapore.

The Singapore Sling was invented in the Long Bar, at Raffles, by Ngiam Tong Boon who was the bartender there.

What Is A Singapore Sling?

The Singapore Sling is one of those cocktails that has many variations.  This is because nobody wrote the ‘original’ recipe down.  In many recipes you will find the pineapple juice is absent.

The herbal liqueur of popular choice is DOM Benedictine.  (The DOM stands for Deo Optimo Maximo).  Benedictine was invented in 1863, in France, and is a closely-guarded secret mix of 27 herbs and spices.

Angostura Bitters are something you need to keep as a constant in your home cocktail bar.  They were invented in 1824 and are an extremely concentrated, botanically infused, alcohol drink.  Apart from the Singapore Sling, the bitters are used in a wide variety of cocktails, including a Bloody Mary, Rum Punch and a Manhattan.

Here is a another recipe for a Singapore Sling that you might want to experiment with:

There is also the discussion of which gin you prefer to use in your Singapore Sling, some recipes call for Beefeater, whilst others choose Bombay Sapphire.

As you can see, with a Singapore Sling, there are plenty of areas available within the cocktail to experiment and find your particular favorite combination of flavors.