What Are The Best Brands of Gin? 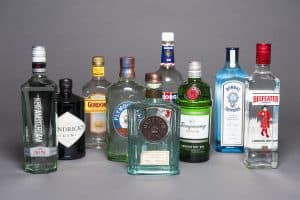 When you want a G & T at the end of a busy day, what are the best brands of gin to make your drink with?

Gin has become an increasingly cool adult beverage to drink, there are local and many craft gins coming onto the market, with different bases of flavor to tempt us.

Of course, there are some fabulous gin-based cocktails, try some of the ones I’ve mentioned here.

What Are The Best Brands of Gin?

In 2017, the world’s biggest selling gins were Gordon’s gin, with Bombay Sapphire at No.2, Tanqueray at No.3 and Beefeater at No.4.

Started in 1769 by Alexander Gordon, Gordon’s is triple-distilled and contains a secret mix of juniper berries, coriander seeds, angelica root, liquorice, orris root, orange and lemon peel.  In the US, it has a strength of 40% and the first distillery opened in 1934 at Linden, NJ.

Surprisingly, Bombay Sapphire has only been around since 1987, the name was inspired by the gins that used to be drunk during the British Raj in India.  The Star of Bombay (a sapphire) is on display at the Smithsonian Institute.

The ingredients in this one are almond, lemon peel, liquorice, juniper berries, orris root, angelica, coriander, cassia, cubeb and grains of paradise (this is indigenous to West Africa and provides a pungent peppery flavor, with a hint of citrus).

Bombay Sapphire has a strength of 47% in the US.  With it’s late addition into the gin market, it is a testament to the branding, design and marketing that Bombay Sapphire is already the second best selling gin in the world.

In 2017, Tanqueray took over from Beefeater to claim the #3 spot and it also won the Gin Brand Champion of 2017. Here in the US, we consume just over a million cases a year, which is Tanqueray’s biggest market.

Tanqueray was created in Brazil in 1830, although it’s now produced in Scotland.  The recipe, as usual, is a closely guarded secret, but it’s known to contain four botanicals – juniper, coriander, angelica root and liquorice.

In the US, it’s strength is 47.3%, it is branded as th ‘bartender’s choice for a perfect G & T’ and is recommended to be served with a wedge of lime.

Are you a gin drinker? There are many men out there who don’t like it, here’s a video to persuade you to sample it again!

I can’t mention best brands of gin without drawing your attention to my particular favorite gin type, I have discovered sloe gin and it has a great taste with tonic and lots of ice.  My next challenge is to make some home-made sloe gin … watch this space!