What Is A Bloody Mary? 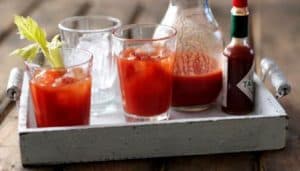 What is a Bloody Mary?  Well it’s the ultimate in pretending to drink ‘healthy’ freshly-squashed tomato juice for breakfast with a decidedly alcoholic twist!

If you are a fan of adult beverages and want a cocktail that is super easy to disguise, then this is the one for you!

The ThingsMenBuy.com team has been known to go on a men’s weekend away or a bachelor party and drink Bloody Mary for breakfast …. and for the rest of the daylight hours too!

What is a Bloody Mary?

History of the Bloody Mary

Similar to the Moscow Mule, there are varying stories and claims as to who invented the Bloody Mary and also where the name comes from.

According to Wikipedia, it was Fernand Petiot who invented it in 1921 or Henry Zbikiewicz in the 1930’s or even George Jessel.  The origin of the name is equally confusing, it could be named after Queen Mary I of England who was known as ‘Bloody Mary’ (she was trying to re-establish the Catholic Church).  Another possibility is the Hollywood Star, Mary Pickford or indeed a waitress called Mary who worked in Chicago, in a joint called the Bucket of Blood.

What is for definite is that the Bloody Mary is often said to be a fabulous ‘hair of the dog’ and a great hangover cure because of all the vegetable-based ingredients.  I know this is the case, as on some occasions when I have been with my buddies, a Bloody Mary will be made in the morning (or whatever time we get up!) and it works!

How to Make the Perfect Bloody Mary

There are many recipes for Bloody Mary, here’s a good basic one from spruce.com:

How To Make It

There are many variables in a Bloody Mary and you can add and take away ingredients as you experiment.

If you’re feeling particularly brave and like a real kick to your Bloody Mary, how about trying Dave’s Scotch Bonnet Hot Sauce instead of Tabasco? (WARNING: Add very sparingly, it doesn’t take much to blow your head off!)

Have a look at our article on the Best Bloody Mary Recipes for some more ideas.

In the meantime, I’ll add this variation of Bloody Mary for you to try:

(Full recipe for this one is here.)