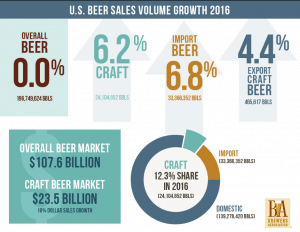 I had several different ideas for this installment of The Craft Joint. None set that well with me. Maybe its because I just got to Texas after driving all day and all night, and I’m feeling a little crispy crunchy. Or maybe I just need to knock back a tasty craft beer. I think its the latter.

Anyway, I settled on taking a look at the top selling craft beers of 2017.

The sales numbers are in and here we go.

What are theTip Top Selling Craft Beers of 2017

As a brand, Sierra Nevada saw their sales drop a little over 8% last year. In dollars and cents that means that they sold over $10 million less of their super delicious beers last year. Sierra Nevada Pale Ale and Torpedo Extra IPA suffered as did Sierra Nevada’s seasonal beers overall. 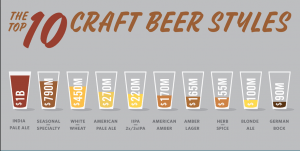 Sam Adams saw their sales plummet by about $15 million. But don’t sweat this too much, they still raked in over $757 million in sales.

Rounding out a look at the biggest craft breweries, Yuengling bucked the downward trend. Their sales crept up by a little over 3%.

Another craft beer sales winner last year was New Belgium which was up by 6.1% and also Lagunitas which bopped up by 9.4%. By the way, Lagunitas was sold in May of last year to Heineken.

Around the Country Good News

The biggest sales increases were posted by regional craft brewers. One of my perennial favorites, 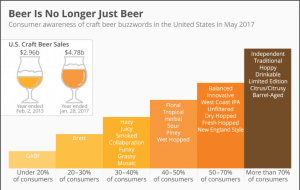 Sweetwater, Firestone Walker, New Glarus, and Dogfish Head all also showed some healthy sales numbers with increases between 11% and 16%.

The biggest numbers were posted by Founders. Maybe selling out to Mahou San Miguel a few years back helped them out. Their sales measured in dollars rocketed up over 40% thanks mainly to the popularity of their All Day IPA.

Beer Help for You and Me! 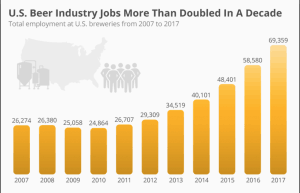 So what in Sam Hill does all this top selling craft beers mean to all of us who love drinking big, flavorful craft beers? It means that the industry is doing well. Sales are up. That means more craft beers are being downed by more beer drinkers than ever before. A healthy industry means that you and I will be able to continue finding and enjoying all that heavenly craft beer that we’ve become accustomed to and love.

It also means more money flowing into the breweries so they can come up with more delicious craft beer flavors. Maybe one of those will become a new favorite for you or I. It’ll be a fun journey of intoxicating discovery!