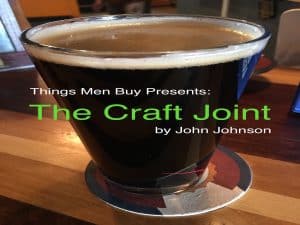 Welcome to The Craft Joint! This is my new weekly craft beer column for Things Men Buy. Big thanks to Tim for inviting me to shoot off my big mouth about microbrews, craft breweries, and just about any related stuff my craft beer loving mind can conjure up for you here at TMB! You’ll find craft beer reviews here and much more…

First, a little background. I’ve been a lover of beer since quaffing my first mug of suds way before I was legally allowed. That’s right, I’m a beer outlaw from way back!

A little later, but not much, my young beer eyes were opened wide during a trip to Germany when I was still a teenager. Heaven, Hell or Hops! Did they have beer that made my inexperienced taste buds jump up and dance the polka! Yes, they certainly did! Because of that trip, I found out there was a great big tasty beer world out there which was previously unknown to me. I was now aware and I surely wanted a barrel full of those flavors!

Jumping to my college years, I mostly took a detour from tasty beer flavor town. This was not due to desire, but rather due to budgetary reasons. Like many college students, quantity was more important than quality. I mean, for the most part. Yet, despite my crew’s usual “getting the most beer for the least amount money” strategy, I was in drinking heaven whenever I would splurge on a Grolsch. In those days that Dutch beer seemed so exotic. I also found it to be delicious. I still enjoy drinking Grolsch to this day.

Post college, as time rolled on, I’d usually opt for anything a little different than the big breweries would put in the cooler or on tap. Amber beers, Ice beers, Malt Liquors, and anything else that at least sounded like it was NOT the usual run of the mill fizz. Don’t get all uppity on me, there are some righteously drinkable Malt Liquors out there both then and now. Don’t argue with me.

Then, I started traveling with my work. This was another serious eye-opener. A very serious and welcome eye-opener. I started seeing more and more craft beers or microbrews or regional beers the more that I traveled around the country. Fellow beer lovers I’d meet around the country would turn me on to their favorite import or regional brew. I listened, I drank, I learned. Watney’s Red Barrel, Anchor Steam, Yuengling, Samuel Smith’s, and more. Guess what? I liked them! Sometimes, perhaps, I liked them too much. That’s all part of the learning curve. Maybe another time…

Now, with those various experiences, my pump was primed for the advent of the craft beer revolution! And it was truly revolutionary for my adventure lusting beer palate. But it didn’t happen all at once.

It was a slow creep. I started noticing beers I had never heard of stocked in coolers of convenience stores, grocery stores, and beer stores. So many more that it almost boggled my curious mind. Not only were the brands I was seeing new to me, there were now bottles and cans with words Stout, Porter, Ale, and IPA proudly displayed on them. 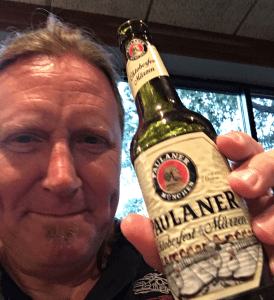 The more I traveled, the more I started seeing more bars expanding their draft selection and they were populated with unfamiliar craft beers. I discovered little breweries I could visit. Then, I found bars with their very own brewery actually inside the bar! Craft beer had truly arrived!

With my seemingly endless taste for a variety of, well, tasty beers, I have and continue to seek out new craft beers, new craft breweries, and brew bars at just about every opportunity. It is both a hobby and a passion.

Which, according to my best guess, is why Tim invited me to join the thingsmenbuy.com family and share my craft beer experiences. I make it a point to visit as many bars as possible (somebody has to do it-I had to say it…yep) and drink as many different kinds of craft and import beers as possible. If I walk into a tavern, I’ll ferret out microbrews if they have any and drink my fill.

As The Craft Joint continues, I’ll do my best to inform and entertain. My craft beer reviews will, hopefully, not be the usual. Sure, I’ll provide the nitty-gritty, nuts and bolts information that so many of us want to know when considering whether or not to plop down our beer bucks because that helps us to make informed decisions and hit our craft preferences. In addition, I’ll also provide personal insight, opinions, anecdotes and any other thing I feel will add to the entire The Craft Joint experience here at TMB.

I love craft beer, I love learning about craft beer, and I love writing….so here we are and here we go. Thanks for joining in. Cheers!