AccuScore For Accuracy In The Pools 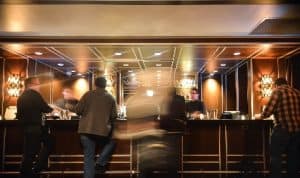 Do women ever wonder what men get up to when they gather around the kitchen table with their mobile phones or a laptop and talk about numbers? Between snacks and bottles of brew, it’s easy for guys to get absorbed in sports scores.

They know all the team’s usual line-ups and formations, top scorers, best players for assists, and who the finest goalkeepers are. Not only do we know who is playing for which team this season plus the names of every coach; our memories take us back to seasons before we got married or even graduated from high school. No wonder anniversaries elude us; there is already too much information in our heads already.

Pertinent Information for the Current Season

Even if we tried, getting rid of that data would be impossible and we might fall apart. Old statistics won’t help us calculate who is likely to win the league title this year or even the next game, but we identify closely with hockey, basketball, baseball, soccer, and other sports. They mean a lot to American men and to expats from the UK and Europe living in the US but continuing to cheer on their teams from Germany, England, and Italy. But cheering is only half the fun; lots of us take our enthusiasm to the next level, one that potentially pays for the make-up dinner we have to take wives on when we forget our anniversaries or their birthdays. 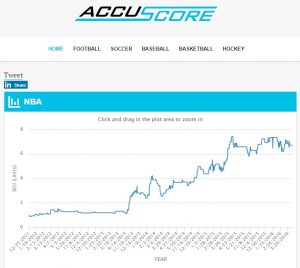 AccuScore is a company that calls themselves a “sports simulation company.” They use cutting edge sports forecasting technology to provide sports picks and data analysis for the major sports leagues (such as the MLB, NBA, NFL, NHL, European soccer clubs) as well as college basketball and football. They also offer information about individual players so that fans can plan and follow their favorite fantasy sports.

While AccuScore offers free trial memberships and coupon codes once in a while (at this writing they have a free 7-day trial membership for first-time members), along with some free picks if you sign up for their newsletter, its primary business model is by paid subscription. They have partnered with some of the biggest names in sports including ESPN, Sporting News, Yahoo! Sports, CBS Sports and NBC Sports – among numerous others that I’ve never heard of (like Athlon, Helio, and Versus Network).

How Much Does AccuScore Cost?

If you’re a first-time visitor and have never signed up for AccuScore before, they are currently (as of January 2017 anyways) offering a 7-day trial for free. Then after that they charge a monthly fee or annual fee, depending on the membership level you choose. Here is the breakdown according to their site*:

What are the Odds?

Betting, gambling, Fantasy Leagues: they are all lotteries and chances of winning aren’t very good no matter how well you know the team, the league, or the game. So much more comes into play than a mere matter of who is on top right now and the top scorers. How does a scorer behave in wet weather? Does a team usually win away from home? When pitted against each other, which of the two strongest players is likely to dominate?

We need this kind of help when trying to predict the outcome of a match. It doesn’t matter that AccuScore gives every subscriber the same results; there will be times when an outcome cannot be determined by the website and fans will still have to think for themselves. Furthermore, we are guys after all; when did we ever accept direction without a fight? Half the time we aren’t going to believe what we are told in spite of the algorithms.

But AccuScore is very reliable, thanks to the fact that it’s software which uses mathematics, incorporates numerous factors, and comes up with a likelihood that is highly probable based on facts. Algorithms follow patterns to determine whether something is reasonable or unreasonable; they can’t determine anything for certain. An event might unfold and, as it does, a dramatic and unexpected action causes the whole picture to change. Who could predict that a player would wind up with a broken leg or that violence would erupt between players or fans in the stadium? Algorithms can’t foresee everything, but their calculations take all reasonable factors into account.

By the way, whether it’s Father’s Day or Christmas or a birthday – whatever the occasion is, it’s always just a few months away. Some families give gifts at Easter too. Who inspired your love of sports in the first place and took you to your first game? What about gambling; did dad initiate you into manhood with a first Fantasy League foray or a bet with his card-playing friends on a Friday night instead of your first cigarette? Not only did he make a healthy alternative choice for his son, but dads who take this route deserve to be honored by their sons. Think about AccuScore membership as a potential gift for one of the holidays above or a birthday for any important man who inspired you.

Check it out now: www.AccuScore.com

Who are the Brains Behind AccuScore?

The people behind this organization have a background in all things related to IT. They were involved in product development, software design, management, and technological aspects of running all sorts of companies with worldwide reputations including a number of Fortune 500 companies. As they come together, this team continues to improve the product, find ways to make calculations even more precise, and ensure the ethics of their undertaking. The company’s software calculates outcomes many times between games; around 10,000 times actually. Changing facts can see results wing 180 degrees between one match and the next.

Simulations continue right up until kick-off. Likely results are measured for hundreds of teams from the United States, England, Germany, Spain, Mexico, Canada, and more. With the likes of soccer, football, baseball, hockey, and basketball involved, this is a year-long enterprise. There are no “slow times” especially during cup season such as UEFA or Stanley Cup play-offs. When the World Cup of any of these sports is underway, there is a lot of data unfolding and many potential currencies.

Currency Chaos Leads to the AccuScore System of Units

That could lead to much chaos, even if the only two countries in your fantasy league are Canada and the USA. Their respective dollars change value against each other every day. Canada’s dollar even occasionally surpasses that of their southern neighbor. What if you were trying to figure out money in UK pounds, Euros, and Swiss Francs. Instead of currency, AccuScore uses a system of 100 units and calculates all money-related data using this system for easier navigation and interpretation.

Visit the home page of AccuScore for a taste of what is to come when you sign up for monthly or annual membership. You are entitled to a number of free picks as a way to find out if this product is worth your while and good value for the investment. Find out the over-under figures in which the wager is based on a predicted value over or under a betting agency’s final total. You can bet there will be a higher or lower number or try for complete accuracy. Determine who will probably win based on the higher percentage as long as that number is significantly higher than the other team’s likelihood. Otherwise, there will be “no pick” and bettors have to decide if they want to forgo wagering money, select a draw, or use their knowledge to go it alone.

* Note on the fees: I took this directly from their site, so I don’t know if those prices will change – assume that they WILL change; this is just how it looked in January 2017.