Guys Weekend in New York Things to Do 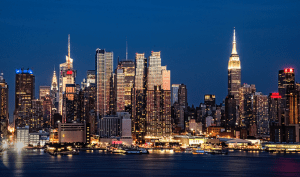 Ready to hit the city with the boys? I mean the big city, the city that never sleeps. I’m talking man-time in Gotham. New York City has countless attractions, restaurants, bars and more to entice you, to engage you, and to simply enjoy. So, what do we do? Where do we start? I’m here to point you in the right direction with some guys weekend in New York things to do.

Men love to eat. New York City has thousands of restaurants. If you’re looking for a legendary New York Steak House click here. Otherwise, here’s a few to get you going for your big boy weekend. 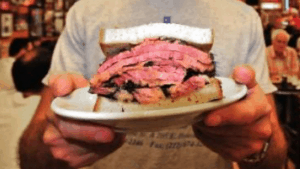 You have to eat at Katz’s. This legendary deli has been around since the late 1800’s. You have to head to 205 East Houston on the Lower East Side and you have to order a pastrami sandwich. It is essential that you have the pastrami. It is the stuff of legends. While you are waiting, under no circumstances should you not lose your ticket! Go right after they open to beat the crowds.

Go to Chinatown and eat at Spicy Village. This tiny joint offers mostly Hunan style home-cooked meals that will make you smile. Have the Spicy Big Tray Chicken if you are a fan of spicy food and beer. This place is friendly so that is an added plus.

Eat a damn New York style pizza. If you don’t then you don’t deserve to visit NYC. Go to 1424 Avenue J in Brooklyn and you’ll be at Di Fara Pizza. Expect a thin crispy crust and the perfect amount of cheese on your pie. All their ingredients come from Italy in this little family run pizza restaurant.

Another big deal thing to do in New York is to hit a rooftop bar. Pick out one or two and spend an afternoon or two drinking your cocktails and drinking in a spectacular view of the city. Bring plenty of money or a never-ending credit limit, remember NYC is not the place for cheap.

Sabbia at La Birreria in the Flatiron District offers views of both the Empire State Building and of the Flatiron Building. Tough to beat that one-two city view punch. Make your way through the tourists and goods at Eataly’s and go up in the too small elevator. It will be well worth the effort. 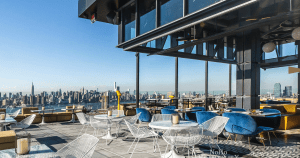 Drinks with a view anyone?

In Williamsburg, check out the Westlight which tops the William Vale hotel. Keep in mind that this is a top-flight joint so dress for it. Expect pricy drinks too. The upsides are, naturally, the view and, perhaps surprisingly, drinks and food that are worth the hefty tab.

There are just so many things that guys can do during their New York weekend that it boggles the mind. I touched on some details above, but from here on out, I’m simply going to throw some things at for you to pick and choose.

All Kinds of NYC Fun

Check out the abandoned City Hall train station. Eat a ground beef chopped cheese in Harlem at Hajji’s in Harlem in the early, early morning hours. Head to K-Town and pick out a song for karaoke (this should happen around 2 or 3 in the morning) at one of the venues.

Get ripped on vodka and dance at a Brighton Beach Russian supper club. Listen to some live jazz in Harlem. If it is summertime, ride the A train to Rockaway Beach and eat some tacos while you enjoy the beach scene. Find a hidden bar, like PDT or Little Branch, and drink illegally…sorta. Go watch the Mets or the Yankees.

How about spending way, way, way, too much money at a Michelin rated restaurant. Spend no money at all going to a taping of a TV show. Speaking of free, take the IKEA ferry past the Statue of Liberty. Sit in the front row of a show at the Comedy Cellar so the comedian can give you shit. There’s not many left so be sure to check out a Times Square peep show, while you still can. Go to Little Italy and eat real Italian food.

More drinking? Sure. Drink pints at old Manhattan dive bars like 7B, Billymark’s West or, better yet, Mother Pug’s in Staten Island or Connolly’s in Rockaway (since you’ve already taken the A train there).

It’s showtime now. Check out a concert at Madison Square Garden. Hustle some cheap tickets to a big Broadway show. Immerse yourself in the weirdness at the House of Yes in Bushwick.

If you have not found enough guys weekend in New York things to do from all my suggestions above, then stay home. Seriously. You have plenty to work with and I expect you to go for it. Be a man. Do not be fickle.