I’ve been reading again. I know you’re thinking, “that’s dangerous”. You may be right but I don’t have to admit it. As far as I’m concerned, I don’t have to admit to anything when I’m out drinking a having some harmless man fun. I think all of us at Things Men Buy can agree to that. And drinking is the topic at hand, specifically the topic of drinking your first craft beer.

That’s easy…drink. Sure, just start swigging down some brands of beers that you’ve never heard of or may have heard of and have just never taken the plunge. 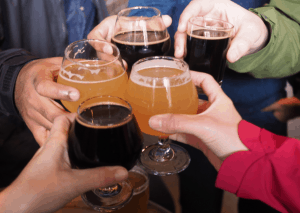 Never fear! The Craft Joint here at thingsmenbuy.com is here to help you or your buds get outta the gate and pop that craft beer cherry. That means I have a few selection suggestions for drinking your first craft beer.

Have a Sam Adams Boston Lager. Almost everyone has heard of Sam Adams beer. It is a lager so it won’t offend most palates, especially those who are regular drinkers of big brewery beers. Sam Adams is a good starting point.

Have a Sierra Nevada Pale Ale

Another good starting point is Sierra Nevada Pale Ale. This granddaddy of craft brewing is a light bodied easy drinking ale with an alcohol content close to what most regular beer drinking dudes are used to every day.

Both of the above-mentioned beers are available almost everywhere and are pretty well known by now. They have survived the tests of time and taste. Personally, I like both of them and believe that most other beer drinkers do too or would if given the chance.

For those who are a little more adventurous, have a Two Hearted Ale from Bell’s. Bell’s Brewery is in Michigan and their Two Hearted Ale is an IPA that is almost universally loved by anyone who takes a sip. At 7% Alcohol by Volume, it packs more of a kick than most are used too. Hey, that’s part of the fun though, isn’t it?

Bell’s Two Hearted Ale is also available in many places. Not as widely distributed as Sam Adams or Sierra Nevada, for sure, but you most likely won’t have too much trouble tracking down some of these bottles of beer love.

With the craft beers I just talked about, you can begin your trip to the land of hops and malts that you might not even know existed. Pop a bottle cap, tilt a glass, order up a draft and get your bad self moving toward craft beer flavor-land. Man up and knock it back!

Now do some fun shopping here at Things Men Buy!