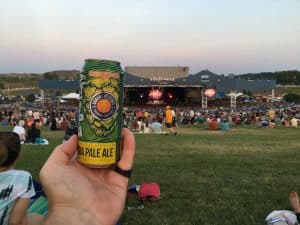 Concerts and Craft Beer. That is something I’ve added to my summer kinda, sorta vacation. The craft beer is a given. We know that. The concerts are unexpected. I have my one of my sisters to thank for that. She decided we needed to hit as many concerts as possible over the summer. Who am I to argue?

Where We Go for Concerts 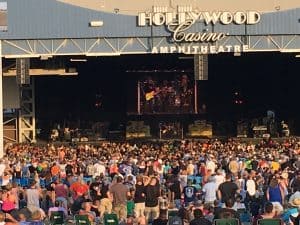 We’ve been going to the Hollywood Casino Amphitheatre which is in Maryland Heights, MO. Maryland Heights is between St. Louis and St. Charles just before you cross the Missouri River.

For any of you that have ever been to any type of concert or sporting event or something similar, which if I had to guess would be everyone, then you know how expensive food and drinks are at these venues. Tickets are expensive too. But my sister has a plan to get more bang for our entertainment bucks.

My sister is Sandy. Sandy’s plan is lawn seats. Nothing revolutionary about that, but she is working the system just a little. St. Louis’ main rock radio station is KSHE. They promote most of the shows. So as soon as they announce a show, she signs up to win tickets. They also offer early purchase discounts.

She gets us tickets for either $20 or $30 bucks each. We get to go watch classic rock bands for damn little money. ZZ Top and John Forgerty. Charlie Daniels Band, Marshall Tucker Band, and The Outlaws are some others we’ve seen so far. 3 Doors Down, Collective Soul, Kid Rock and others are coming up. For $20 or $30 dollars, I think they are a deal.

She is always the driver so I can imbibe to my thirsty heart’s content. We pack a cooler with some pre-show adult beverages. We get to the parking lot as soon as they open, find a spot, and do a little tail-gating.

Where does the craft beer come in? Well, once in the amphitheater I still have a thirst. Fortunately, they have craft beer. An IPA that is local. Sure, it costs me $14 for a 16 ounce can. Ouch! But I’m not paying $50-$100 or more for show tickets. That’s how I rationalize it. I spring for a few over-priced craft beers at the venue and I feel like I’m still within a decent spend. 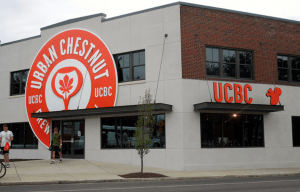 I also like the fact that the craft beer I’m downing is an 8% ABV Double IPA. Urban Chestnut is the brewery. The beer is STLIPA. STL for St. Lou and IPA for…IPA. A little acronym action there, for sure.

STLIPA is a back to back gold medal winner at the World Beer Championships in 2015/16. It is a hop bomb. They use Chinook, Cascade, Sterling, Columbus, Willamette, and Mt. Hood hops. All those hops are countered with Munich and Pale Ale malts. It has a fairly light copper color.

You know what is stupid about the whole thing. Not Urban Chestnut, they are a stellar brewery. And not STLIPA either because it is one damn tasty craft beer.

What is stupid is that I get a big kick out of the can. I’d buy this double IPA just for the damn can. I’m not talking about the label. I have a crush on the can top. The whole damn top of the can comes off! When I open it, it is like I’m drinking out of a handy aluminum glass.

Stupid? Pretty much so. But I still get a kick out of it. Plus the beer is really damn tasty, so that helps too.