What are Craft Beers? Part 3

I have, via this column in Things Men Buy, been exploring the behind the scenes world of 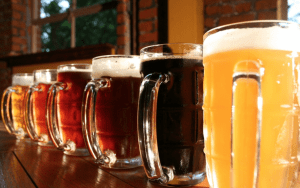 craft beers. Since there seems to be much confusion in the craft beers arena, I simply wanted to answer the “what is craft beer?” question. As it has turned out, there is not a simple nor a cut-and-dried answer to that question. Or so it may appear on the surface.

To figure out the answer has required a bit of exploration so that we can get a handle on how the authorities of the craft beer business define things in their market segment.

To many, myself included, craft beer is beer brewed by small breweries. What I have discovered is there are varying degrees and definitions involved in figuring out what a small brewery is and is not.

To throw a wrench in the works, there’s some controversy brewing (sorry, I had to) in the craft beer world. Big breweries have been launching and operating what some call “Craft Beer Arms”. These “arms” are taking over or, at least, getting hugely involved in craft breweries. As you can imagine, folks are arguing about this and whether its a good or bad thing and how it is affecting our beloved sudsy adult beverage. I’ll dive into this craft beers issue another time.

Previously, I covered microbreweries, brewpubs, and contract brewing companies to figure out how the industry itself defines or categorizes small breweries. The last craft brewery designation left, according to the Brewers Association, is Regional Craft Breweries.

First and foremost, a Regional Craft Brewery is independent. It is not part of or affiliated with one of the big mainstream breweries. In addition, most of the craft beers they brew has to be either innovative or traditional.

Innovative, in the craft beer world, means that the brewer gets creative with historic styles of beer. They add their own twist to make it their own. It also means they get inventive. The brewer develops their own style of beer, a style that is new and has not been done before.

Traditional means that fermentation is part of the process. Most of the alcohol content in a beer for it to be a craft beer has to be from what is considered traditional ingredients like malted barley. The flavor of the beer comes from these type of ingredients. Other ingredients can be added to impact the flavor. However, flavored malt beverages are not included. They are not considered beers.

The Other Beer Breweries

Beyond that, there are regional breweries and large breweries. A regional brewery has an output between 15,000 to 6,000,000 barrels annually and they may or may not be a craft brewery. A large brewery produces over 6,000,000 barrels annually and they do not fall under the craft beer criteria. I felt like throwing those in there for the sake of completeness.

What is Craft Beer? The Answer is Here!

Finally, my patient adult beverage friends, the answer to the question is upon us. What is craft beer? Craft beers are beers brewed by a small, independent, traditional brewery! A brewery that produces less than 6 million barrels of beer a year is considered small according to the industry. A brewery is that is less than 25% owned or controlled by a non-craft beer brewer is considered independent. The total economic interest of any kind must not total more than 25% by a non-craft brewer alcohol industry member. Traditional methods, as I discussed above, must be used for a beer to be considered craft beer. Again, small, independent, traditional.

This particular journey is now over. My goal, in the course of what turned out to be a series, was to illuminate and educate. The more we know, the better off we all are is my humble opinion. I’m hopeful that you feel that way too, have been interested in this information, and feel better off because of it.

Did someone just say its beer-thirty? Sounds good to me. Grab one of your favorite craft beers or a newbie and knock it back in delicious celebration. Cheers and have a happy Halloween!