Who Is Dan Bilzerian? 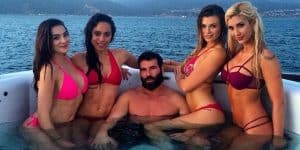 Would you like to be a multimillionaire playboy?  Stupid question, right?  Of course you would, our post on Who is Dan Bilzerian takes a look at how you could live if you were that playboy!

Dan is a poker player, an Instagram celebrity, hangs around with famous people, shoots guns and has lots of hot girls hanging around with him.  What more could we all want, that’s our idea of heaven, right?  I found a great post by a guy who decided to live like Dan for a week, check it out here! This post suggests that potentially, Dan’s lifestyle is not as great as it seems on the surface!  Let’s investigate deeper!

Who is Dan Bilzerian?

A lot of his fame comes from his Instagram celebrity status, have a look and you’ll see hundreds of pictures of adrenaline-fuelled adventures and sexy women.

Where did Bilzerian get his wealth from?

If you listen to him, the money came from poker initially, he worked on his social media status and then got more money from becoming famous.  He is known by some as the “King of Instagram”.

It seems more likely that he had money to start with from his Dad, Paul Bilzerian.  Dad created several trust funds for Dan to enjoy his lifestyle before he ever started playing poker.  He has a brother, Adam who is also a poker player and beneficiary of Dad’s trust funds too.

Where does Bilzerian get his sexy women from?

He also works out, goes to the gym, consumes protein shakes and mixes with celebrities – often a very attractive bachelor-type for the previously mentioned girls who want to become famous through Dan’s status.

Here’s some more on Dan:

Bilzerian found himself involved in the Las Vegas Shooting on 1 October, 2017.

He filmed himself running away from the scene, here’s the live footage he posted on Instagram:

Back to our original question, Who is Dan Bilzerian?

Is he the “ideal” man who we should all aspire to?  Check out Craig’s post on manly things we should all have to see if you meet the grade!

Listen up, most of us dream about living the “bachelor lifestyle” and on the surface, Bilzerian’s life looks totally cool.  If you dig a bit deeper though, his life seems to revolve around publicity stunts.  It is impossible to say whether any or all of these stunts are for real or not, I’ll leave you to decide!

Remember if your days as a bachelor are nearly up, check out our posts on great places for your bachelor party in our travel deals section!