What Is A Tom Collins? 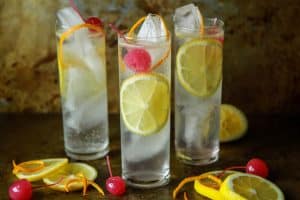 As with many cocktails, the origin of this gin-based cocktail is subject to debate.  What is a Tom Collins?  Apparently, it originated after ‘The Great Tom Collins Hoax’ of 1874.  The reasoning goes that due to this hoax, the Tom Collins became a cocktail in 1876.

What is a Tom Collins?

The recipe of 1876 created by Jerry Thomas “the father of mixology” is:

“Jerry Thomas’ Tom Collins Gin (1876)
(Use large bar-glass.)
Take 5 or 6 dashes of gum syrup.
Juice of a small lemon.
1 large wine-glass of gin.
2 or 3 lumps of ice;
Shake up well and strain into a large bar-glass. Fill up the glass with plain soda water and drink while it is lively.”

The particular type of gin called for in the Tom Collins was not the usual London dry gin that we know today, but Old Tom gin (popular before the Prohibition) or Dutch gin.  Check out this post from thespruce.com to find out more about these two types of gin.

The modern Tom Collins recipe has changed little, gum syrup is more commonly known as sugar syrup and the ‘large wine-glass of gin’ is a little more specific.  A modern recipe could read:

These days, the Tom Collins would be served in a Collins glass, which is narrower than a highball.  Check out our post on advanced mixology to get your own set of Collins’ glasses for your home bar.

Other cocktails of the Collins family

The basic formula of a “Collins” cocktail is:

The exact quantities will change depending on what base liquor you use.  The varieties for this liquor are:

John Collins:  Bourbon is often preferred for a John Collins, but you can also use Canadian, Irish, rye, and blended whiskies too.  It all comes down to your own personal taste preferences.

Vodka Collins:  This one is obvious from the name!  Choose your favorite vodka as the base liquor.

Juan Collins: This cocktail has a base of tequila.

You can also make up your own version of a Collins cocktail, start with the recipe above and be experimental!  If you don’t want to make your own Collins sour mix, it is easily available to buy (at ThingsMenBuy.com we prefer to make our own!)