What Is A Floradora? 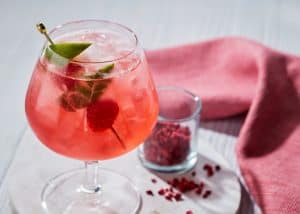 This gin-based cocktail is a classic that you may not know about.  What is a Floradora? It originates from the musical called Florodora and was a massive hit in the 1900s through to the 1950s.

It could be called the original ‘girly drink’ but at ThingsMenBuy.com, we rather like the taste combination that this cocktail provides!  (It is pink, but hey, you can’t have everything!)

Here are the Floradora girls to give you an idea of how marvellous the musical was in the 1930s!

What Is A Floradora?

It was only a matter of time, given the success of the musical Florodora, that the High Society of that era would be demanding a new cocktail to satisfy them.

There are some great cocktail ideas using Chambord on their site.

What Is A Floradora Girl?

It would seem a good idea to use this wonderful cocktail to find yourself a fantastic lady!

The Floradora girls would often end up finding themselves a wealthy man to marry, leave the musical and yes, you’ve guessed it, live happily ever after!  According to Wikipedia, the show always had a sextet of women in it and ALL of the first sextet married a millionaire!

No reason why we can’t do the same!  With a bit of mixology practice in making the perfect Floradora, your reward could be to find that lady of your dreams and … live happily ever after!

If you pay attention to detail, get your recipe absolutely right with your favorite gin, fresh lime juice and serve it in a Collins glass, you are surely onto a winner!

Check out advanced mixology to find the Collins glasses that you will need for your home bar.  Of course, once you’ve got your set of Collins glasses, you might as well learn how to make some classic Collins cocktails too!