The History of Under Armour 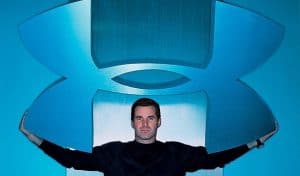 At ThingsMenBuy.com, we love our Under Armour gear, so we thought we’d dive into the history of Under Armour.

We love the look and feel of Under Armour whenever we want to dress casual or play the sports we enjoy.

The History of Under Armour

Under Armour was founded in 1996 by Kevin Plank who was 23 at the time. He founded it in his granny’s basement in Washington D.C. and after he got his first team sale for $17,000 he moved to Baltimore, Maryland.  The current headquarters are in Tide Point, which Plank acquired in 2011.

Why Did Kevin Start The Company?

Kevin used to play fullback at the University of Maryland, and at the end of a game, like the rest of us, always used to have sweat-soaked t-shirts.  He noticed that his compression shorts, that he wore during practice, stayed dry and this was his inspiration for designing a t-shirt which was made from synthetic fabric that had a moisture-wicking quality.

Once Kevin had graduated from Maryland, he made his first prototype of the t-shirt and gave it to his teammates and friends, some of whom had gone onto to play for the NFL. A former teammate, Jim Druckenmiller, became a back-up quarterback for the San Francisco 49ers and told his teammates about Plank’s shirts. Soon, Jeff George the quarterback of the Oakland Raiders, was on the cover of USA Today wearing an Under Armour shirt.

During his career, George was a quarterback for the Colts, Falcons, Raiders, Vikings, Redskins and Seahawks. Here’s some of his highlights:

Big Breaks in the History of Under Armour

Under Armour outfitted two major films, Any Given Sunday and The Replacements. Any Given Sunday was directed by Olive Stone, and Al Pacino shares a great motivational speech with his football team before an important game:

On the back of this film, Plank took an ad out in the ESPN The Magazine which generated $750,000 in sales and it meant he could finally put himself on the payroll. 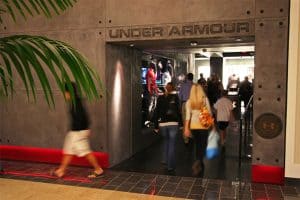 The concept of the first store was for customers to feel like they were walking through a stadium tunnel on game day.  This look was created by using unique, custom 4′ x 8′ concrete panels to create the storefront design.

At the beginning of 2020, Under Armour will replace Majestic, who has been MLB’s uniform provider since 2004.

The History of Under Armour Partnerships

Under Armour has also built it’s brand with some great partnerships with NBA Stephen Curry:

As the weather gets colder, Under Armour cold weather gear comes into its own, Tim talks about some of the best of their clothing for the winter here.

We like to look after you guys who read our blog, check out our Under Armour coupon codes here.