Back when I was in high school in the 90’s, the only thing that mattered to the people in Minnesota was who was good a putting the puck in the net, who had a hard slap shot, and who could put a guy over the boards.  Sure, football, basketball, and even baseball had their pockets of popularity, but the main sport of hockey was the one 99% of the people cared about above all other.  Unless you were a hockey player, or a Minnesota Viking, you were just another athlete.

Tell that to Rickie Fowler, Jordan Spieth, Smylie Kaufman, and Justin Thomas.  All of these accomplished (especially Spieth, arguably the best golfer on tour right now) PGA tour golfers are living the high life, even on their down time between tournaments.  Case in point, their recent “Spring Break” trip to Baker’s Bay.

Just look up that hash tag and witness all of the fun.  Today I dive in to the story of how they got there, and why they had so much fun.

Baker’s Bay may not sound like much to you, but to the ultra rich celebrities, it’s really a place that is known as that secret vacation spot.  Ben Affleck, Cindy Crawford, Elle MacPherson, Tom Brady, and even the legendary Michael Jordan all frequent Baker’s Bay.  Fowler owns one of the residences there, and there are fewer than 300.

Immediately after the Master’s, the foursome took off for Baker’s Bay for a week of partying.  To say it was wild is an understatement.  The stuff seen on public social media was off the charts, so I can only be left curious to what they didn’t show us.

Fowler put the entire ordeal on snap chat.  Today, I provide you with some of the awesome highlights.

Clearly, it’s good to be young and consistent off the tee!

One observer, named Nathan Hubbard, who posted a great recap of this entire ordeal here, noted that the crew played golf in carts, shirtless, and blaring music.   Minus the shirtless part, that’s a standard round for me, but one that these guys don’t get to enjoy too often at the stuffy clubs they have to compete at.

Side Note:  I found this story on many news sites.  NONE had the depth of Nathan’s.  None.  Not even close.

Side Note 2:  Nathan is a beast himself.  Former CEO of Ticketmaster.  Well played.

First off, they are on break, and they should be hammered.  They have every right to.  But second, this course caters to this debauchery.  There is a bar called the Sip Sip.  Need I say more?

Okay, I will.  They do shots of Casamigos tequila (which I love, but you’d think they would get Don Julio Real?)

#3:  They Got Their Own SnapChat Filter

This is perhaps the most impressive part of the entire ordeal.  Snapchat made them their own filter.  Slow clap, guys.  No, fuck it.  HUGE APPLAUSE. 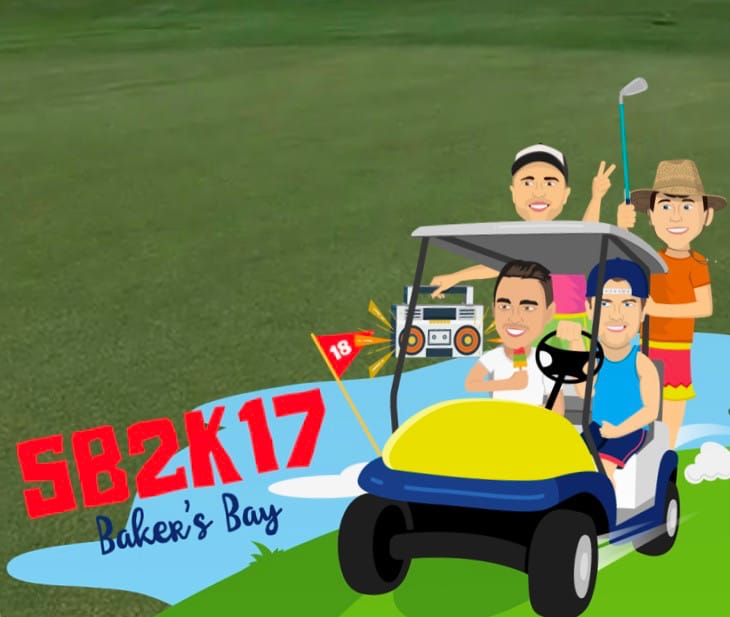 These guys are the epitome of millennials living large and enjoying it.  Good for them, they entirely deserve it.  Who do you think hooked up the most?

Here are a few clips from this amazing Bro-Fest.