What is a T-bone steak? 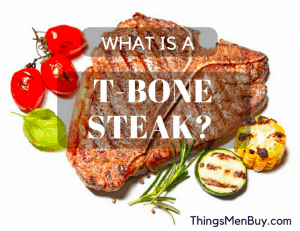 When it comes to talking about steaks and your favorite cut of meat, many people say that porterhouses and T-bones are really just the same thing. Then again, many people also think that the earth is flat or you should put ranch dressing on pizza.

In fact, there is a distinct relationship between porterhouse cuts and T-bones. The confusion is understandable, considering that T-bones and porterhouses are cut from the same area of the cow, and they also contain the same kind of meat.

So what’s the actual difference between the two cuts? It really comes down to the size of the fillet. In fact, Porterhouse steaks are thicker and contain more meat – but are also priced accordingly.

According to the USDA’s Institutional Meat Purchase Specifications (say that ten times fast), the tenderloin portion of a porterhouse must be at least 1.25 inches thick. However, according to these same USDA standards, a T-Bone only needs to be 0.5 inches thick in its tenderloin.

Even restaurants, steakhouses and butchers sometimes get it wrong (or misrepresent!), calling large tenderloins T-Bones.

But there are many similarities, too, with both cuts coming from the short loin, and both steaks featuring a t-shaped bone with meat on each side.

When cut away from the T-Bone, the smaller portion of meat is known as a filet mignon and often served on its own.

Remember, too, that T-bone steaks contain meat from both the tenderloin and short loin, two of the most revered and tasty cuts of beef.

T-bones are considered the highest quality steak you can eat – without the top tier prices of porterhouses. When picking out a T-bone steak at a butcher, look for a thicker cut that still is shy of the 1.25 inches that would classify it as a porterhouse (and send its price higher).

You also really need to know what you’re doing to grill a T-Bone correctly since it contains two different cuts of meat that cook at different rates. Expert grillers and restauranteurs manage to cook it equally and consistently by building a fire, setting the coals, or lighting the grill only on one side, with the strip section over that flame but the filet over a cooler grill, which will result in a rarer cook and a perfect T-bone!