What is the Difference Between Filet Mignon and Chateaubriand? 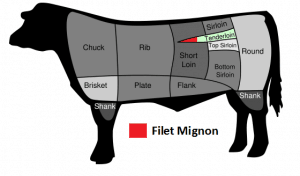 This is my favorite method – starting the filet mignon in a pan and then transferring it to the oven. I like mine rare, so 5 minutes in the oven is all it needs:

It’s without surprise that cooking the chateaubriand is very similar – it just takes longer because it is a thicker cut of meat. Again, I’d recommend using the pan to oven method and follow timings depending on how you want your meat cooked.

Well, if you’re dining alone, treat yourself to a filet mignon and if the table is set for two, then it’s chateaubriand all the way! Either way, you could choose to get these cuts from wagyu or kobe beef – whatever your choice, it will be delicious if you take a little time and care in the cooking.

There has been some discussion as to whether filet mignon and chateaubriand are as flavorsome as other steaks, such as ribeye. Filet mignons are not as popular as they once were, but they continue to be my personal favorite – for me you can’t beat a good piece of fillet steak that has been cooked rare to blue.

I have great childhood memories of going to the steakhouse with my Dad – we’d both have fillet, mine would be rare/blue and Dad’s would always be well-done; this never failed to cause a sharp intake of breath from the waiter who would quickly regain his composure and say, “Would Sir like the fillet butterflied?” when what he really wanted to say was, “Oh No! We can’t cook a fillet steak well-done, it will ruin it!!”

Now, your biggest decision is where to buy steaks.  Make sure to read this review and you’ll find out where we like to buy our steaks if we are ordering online.