One week until Christmas. It is the holiday season. Merry Christmas and Happy Holidays to one and all! Before I write some more about Yuengling next time, in this edition of The Craft Joint, I thought I’d mention a couple more special Christmas craft beers perfect for this time of year. 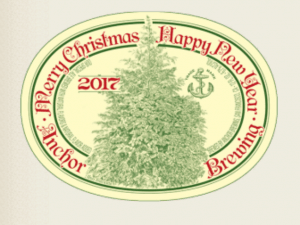 Way back in 1975 Anchor Brewing, of Anchor Steam fame, decided to release the first holiday beer in America. That hadn’t happened since the years of Prohibition. Every year since 1975, Anchor has created a brand new, secret recipe and brewed their Christmas Ale. No slouchers, they also come up with a completely new and unique label for their annual Christmas Ale.

Their Christmas Ale is a heavily guarded recipe. It is sold only from early November to mid-January. If you haven’t had any yet, go get some right now. I’ve been a fan of Anchor Steam since I first had it back in 1980 when I was visiting Los Angeles.

According to the Brewmaster

This year’s run is sure to be a winner. Here’s what Anchor Brewing’s brewmaster has to say about this year’s Anchor Christmas Ale. “This year’s Christmas Ale has a strong malt profile that is enhanced with wintry spices,” said Anchor Brewmaster Scott Ungermann. “The beer pours a deep, dark, mahogany brown with a creamy, tan head. It has flavors of creamy bittersweet chocolate, coffee, roasted malts and toasted nuts, with a rich, smooth, velvety mouthfeel. This is the third year in a row that we peeled back the layers of spices, taking some ingredients out and making those remaining stand out even more. In the meantime, we added more specialty malts, some that we’re using for the first time. The combination of malts, spices, and hops add layers of complexity to the beer and bring this year’s ale to a new level.”

I’m all jacked up about that! I want to say, “Thank You” to Anchor Brewing for supplying the above information about this year’s unique Christmas craft beer offering.

Red is a major Christmas color. Santa Claus has a mostly red suit. Rudolph is called the “red” nosed reindeer for a reason. Candy Canes have a red stripe. Holly has red berries. And Troëgs puts out a red Christmas Craft beer!

I covered the West Coast with the Anchor Steam Christmas Ale. Now I’m heading East. All the way over to chocolate town itself, Hershey, PA which is home to Troëgs Independent Brewing. Troëgs has been around and been independent since 1995. They make a variety of damn tasty beers. If you’re in their distribution area, you might be lucky enough to get a tulip filled with Mad Elf. 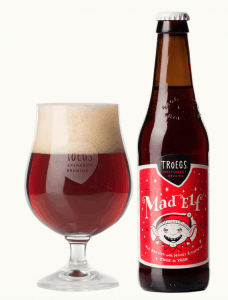 Mad Elf is offered by Troëgs every year from around the middle of October through December. Mad Elf is a red beer. Yep, it has a wonderful ruby-like red color. The folks at Troëgs “blame” their inner “Mad Elf” for taking over the brewing operation this time of year. Only fitting, then, that they put out a beer named “Mad Elf” every year for us to enjoy over the holiday season.

At 11% Alcohol By Volume, Mad Elf definitely qualifies as strong. It is, indeed, a strong dark Belgian style ale. They use Pilsner, Munich, and Chocolate Malt. Hallertau and Saaz hops are added along with a unique Spicy Belgian yeast to complete the list of goodies used to brew this seasonal craft beer.

Troëgs says to expect a medley of flavors the strongest being honey, cocoa, and ripe cherries. In the backfield, you might notice allspice, clove, and some cinnamon. Of course, you’ll be sure to notice the red color.

With a name like Mad Elf, how could you possibly pass this tasty brew up during Christmas? I hope you can find it on tap. It is available as far west as Cincinnati, OH and other select spots eastward from there.

From me and everyone at Things Men Buy, enjoy the holidays and as ever, Drink More Christmas Craft Beers! Ho! Ho! Ho!