How to Smoke Ribs on a Weber Smokey Mountain

It has gotten to be a ritual at this point. Anytime the boys are coming over for the game or when I‘m hosting for a big UFC fight, before we light up our favorite cigars, a prerequisite for them coming over is that I have to smoke ribs. I’ve always been a huge fan of BBQ, but I got absolutely hooked when I decided that I wanted to start trying to do it on my own. To be honest, the first few attempts weren’t pretty. The ribs were barely edible. But I was obsessed. I started watching hours of videos of backyard pitmasters, read countless BBQ books, DVR’d all the BBQ shows on TV, and went to as many rib cookoffs as I could. I had to know how to do this myself. It became my mission to master ribs in my own backyard. And now I’m required to make them whenever the boys come over. So get ready to crack open a few adult beverages and have the best ribs you’ve ever had in your life!

So here are my tips for making ribs. As the title suggests, I use a Weber Smokey Mountain smoker. Mine is 22” and it is a beast. It may look like a black R2D2, but I don’t think I would ever want to smoke ribs on another cooker. You actually see these in competition BBQ a lot because they are very easy to maintain temperature. And that is one of the first keys to smoking ribs. You have to maintain temperature. Low and slow. You don’t want your cooker running hot. This is a marathon. Not a sprint. Some other grilling accessories you will need are lump charcoal, wood chunks, water, aluminum foil, apple juice, a good rub, and a good BBQ sauce.

So let’s get the ribs ready. I like to use spare ribs. Mainly because that’s what most competitors use during competition. I find them to be meatier and you get a better “competition rib” which really means it looks better when it’s cut. You can certainly use baby backs if you prefer. I just like St. Louis style spares.

So the first thing you do is remove the membrane from the back of the ribs. Some people call it the silver skin. I think that’s gross, so we’re going to stick with membrane. I used to think this was impossible to do, but once you do it a few times, you get the hang of it. I use a butter knife and gently work it under the membrane right on one of the ribs and lift up slowly. This tears the membrane off and you can work your fingers in slowly to get the rest of it. 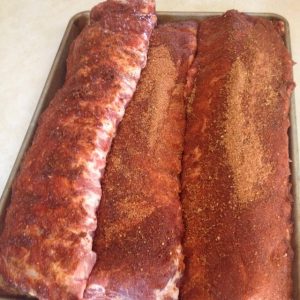 Once the membrane is off it’s time to rub your ribs down. There are so many rubs out there nowadays. To be honest, I typically make mine on the fly. Whatever I’m feeling. There are a few secret ingredients I like to use every now and then that bring an extra layer of flavor. Those are basically the sugars. So a lot of rubs use brown sugar in them. I do that a lot too. But I have also experimented with maple sugar as well as honey power as my sugar base for my rubs. Both of these were purchased online and I really only use them on my ribs. Other ingredients that I mix in on my rubs are paprika, pepper, salt (seasoned or not), garlic powder, onion powder, chili powder, cayenne, orange peel (dried up in spice section), and Hot Shot spice. I’m sure there are times when I’ve used other spices for my rubs but that’s all I can think of as I’m looking at my spices right now. So you want to put the ribs on a cooking sheet and sprinkle them with your rub. I don’t really like to massage the rub into the meat. I just sprinkle it over the top and let it sit for a half hour or so while I get the smoker going. You don’t want to put too much on, either. You’ll end up having a gritty, pasty layer of rub on the rib that is just downright nasty. So don’t layer the rub on there! 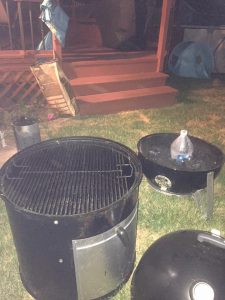 So now that we’ve got the ribs ready, we let them sit while we get the cooker going. To do that I separate the top and set up my base. I only use lump charcoal. It’s real. It’s natural. It’s not manufactured and doesn’t have anything added to it. I typically like to use the “minion method” when smoking. To do that you put something in the middle of the fire basket (bottom part of smoker). I typically use a 2 liter soda bottle. Then you pour your charcoal around the bottle. When you take the bottle out you will have a hole in the middle. Now you pour charcoal into a charcoal chimney starter. You can get these for like $20 at Home Depot. Take a couple of sheets of newspaper and twist them up and form a ring. Place them under the chimney and light them. The charcoal will take about 10 minutes to be ready. At first you’ll see a ton of smoke. This is the newspaper burning off. After that, you let the charcoal heat up. Once done, carefully pour that charcoal into the empty hole in the fire basket. 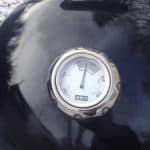 Now you place the middle section of the smoker on. Put the water pan in and fill it slowly. Make sure you do not allow it to spill over onto your fire! Once that is filled, you place the top on and let the smoker heat up. You want to get it to a consistent 225-250 degrees. To manipulate the temperature you have to adjust the air vents. There are 3 at the base of the cooker (where the charcoal is) and one at the top. These allow for airflow and you don’t have to be Bill Nye to know that the more oxygen a fire gets, the more it will burn. So if your cooker is running hot, close the vents to half full.

Once you are up to temp, you put your ribs on. Now I like to cook with what’s called the 3-2-1 method. It’s supposed to be 3 hours, 2 hours, 1 hour. A lot of times I will adjust it and lower the times, but it means that you have the ribs directly on the smoker for 3 hours. Then you take them off and wrap them loosely in foil for 2 hours. I like to pour apple juice into the foil and make a closed off tent during this time. This makes for a nice, moist rib. The last hour is another one that goes directly onto the grill, but you add your sauce. I have found that I get great results by taking a half hour off of the times. Especially if your cooker is running hotter. You don’t want your ribs to disintegrate and be mush. 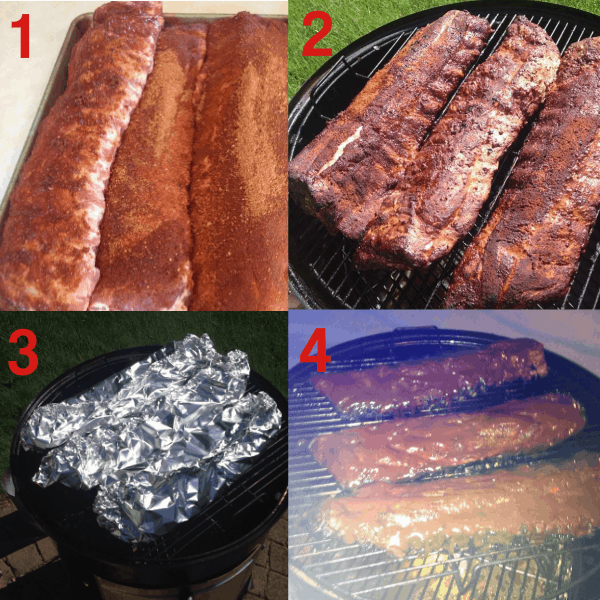 Now that you’ve added your ribs, you need smoke. To get smoke, you need wood. There are many different kinds of wood that people like to use to smoke ribs. I like to use apple and pecan wood. But you can experiment with different types of wood and see which flavor you enjoy the best. The one thing about the wood that I would recommend is that you use chunks. Pellets are alright, but chunks give you a longer smoke, and are easier to manage. You also have to be careful not to overdo it here. You don’t want to put so much smoke flavor on the ribs that it overpowers all of your other flavors. Less is more when it comes to smoke, in my opinion. So once you put the ribs on the grill, open the door on the side and toss 4 or 5 wood chunks onto the burning coals. This will give you all the smoke flavor you need. You may throw a few on during the last hour of the cook. But when you are on the second phase of the cook, when your meat is in the foil, there is not smoke getting to it so there’s no point in having any during that timeframe.

So that’s pretty much it when it comes to smoking ribs. The biggest piece of advice I can give is to experiment! You will get addicted to doing this and it will become an obsession. There is no better feeling of manly achievement than when another guy tells you that your ribs are the best they’ve ever had. It’s the highest compliment that another guy can give you.
I hope you enjoyed this article! Let me know in the comments of any tips or tricks you have up your sleeve when it comes to smoking ribs.

If you liked this article, you may want to read about Tim’s new bacon making machine.