Are you a Golf fan?  Want to know who Rickie Fowler’s Girlfriend is? 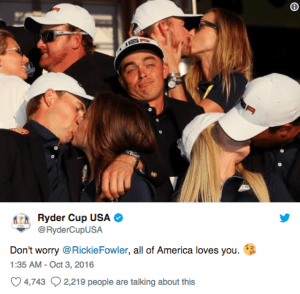 Things have come a long way for Rickie Fowler since the Ryder Cup in 2016.

The classic photo of the US Team celebrating with their partners … except for Rickie, led to an outpouring of love for him on Twitter!

Since then, has Fowler found a hot lady or is he still Mr Single?

Not only has Rickie bagged himself a bodacious babe, she comes in at #1 in a list of the Top Ten hottest female Olympic Athletes!

Californian born Allison Stokke is a pole vaulter who became famous in 2007 at the age of 17, when her pole vaulting photos went viral.

The photos got the attention of sports blog ‘With Leather’, who cater to a male audience, and from there the images went worldwide.

Stokke wasn’t entirely happy with her new found fame, telling The Washington Post: “It just all feels really demeaning. I worked so hard for pole vaulting and all this other stuff, and it’s almost like that doesn’t matter. Nobody sees that. Nobody really sees me.”

Allison has risen above all that now though and as well as being Rickie Fowler’s Girlfriend, she has found massive success as a sportswear model.  It has been an extremely tough transition for her, to cope with all the media publicity and being thrust into the spotlight for her looks and not her sporting prowess.

In fact, the video above isn’t strictly true as she never made it to the Olympics – despite intense training, the pressure was too much and she did not get the qualifying height she needed.

These days she can be found on Instagram by searching @allisonstokke, where she boasts a huge 347k followers.  Her twitter is @StokkeAllison, where she frequently uploads videos of her athletic adventures.

It’s testament to her strength of character that Allison has weathered the media storm that whipped up around her, through no fault of her own and embraced Rickie into her life as her new man. 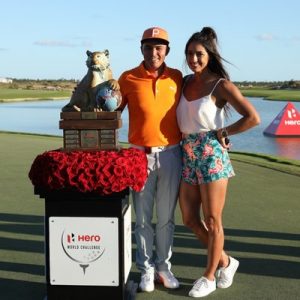 You can often see Allison on the golf course supporting Rickie.

Apparently Allison has taken up golf too – watch out Rickie, she’s coming to get you!

Rickie’s got a girl, How About You?

Ok, so no need to get jealous! (Well maybe a bit!)  At ThingsMenBuy we aim to help if you’re struggling with finding your own hot babe.  Have a look at these articles to get you started:

Don’t worry, we have your back – check out our thoughts before you join up to any of the dating apps out there and save yourself a ton of time and effort!