Beer and The Beach Boys 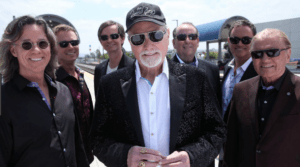 Wow, the end of July is just about here. I’ve been busy with travel, work, and craft beer. Of course, craft beer. In fact, I just had a new beer I have not had previously. Where? What? And all that jazz? Here we go.

I went to The Beach Boys concert last night. The answer to the first question is “yes”. Yes, they are still around. Founding member Mike Love and very long time member Bruce Johnston are there. Johnston has been involved with the group since 1965.

I love surf music. Dick Dale is a fav.  With The Beach Boys, I especially like the surfing songs and car songs. You could say that pretty much covers it. Oh yeah, the songs about girls too. Now I have it covered. Just that whole Southern California beach culture thing gets me all jacked up.

Back to music. I tell you what, they sounded good. All the way around. Great videos playing on a huge screen behind the band too. As far as how they sounded, their touring band is the shit.

They have a helluva band assembled. More than a few of which have been playing with them for quite some time. John Cowsill on drums and vocals, Jeff Foskett on rhythm guitar and vocals, Scott Totten on lead guitar and vocals along with some other great players too. Foskett provides the falsetto vocals that are a big part of many of The Beach Boys songs.

I went to see the show at the Liberty Bank Amphitheater along the Mississippi River in Alton, IL. It was my first time at that venue. I have to say it was pretty sweet. The weather was kind of rainy. Off and on, no big deal. Good crowd that was surprisingly of mixed ages.

Naturally, I found the beer tent. As expected, the craft choices were severely limited. They had two offerings from Boulevard Brewing out of Kansas City. I was a fan of their now-retired Double Wide Imperial IPA. I also like their Quadrupel called “The Sixth Sense” which is part of their Smokestack Series. The Sixth Sense is big, bold, and packed with brain buzzing alcohol.

Overall, Boulevard brews a bunch of great craft beers that look interesting to me. What they had at the concert was their year-round Unfiltered Wheat. I wasn’t in the mood for that so I opted for the other choice which was Jam Band.

A buddy, Buford, was working the beer counter and recommended it. All I can say is Buford and I have very different tastes in beer. 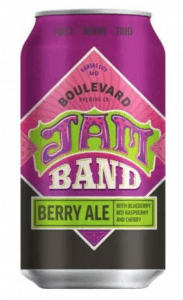 Once I tasted it, I felt like an idiot. The “jam” in the name should have been an obvious clue as to what I was getting involved in. Jam Band is a berry ale. It is a very berry ale, in my estimation. Way over the top with berry flavors and berry connected sweetness.

There were blueberries, there were raspberries, there were cherries (supposedly tart?!?!) and I was definitely over-berried. Have you ever made gelatin, as in Jello®, and slurped down the liquified mix before sticking it in the fridge? Very concentrated flavors. That is what I felt like I was drinking, except more concentrated. It was like a pick-up truck full of mixed berries smashed into one can.

As you have, by now, figured out, I am not a fan of Boulevard’s Jam Band. Thank the beer gods that it clocked in at 5.9% ABV so drinking it was not a total loss.

Keep bending those elbows, my friends.