How to Approach a Woman With Headphones 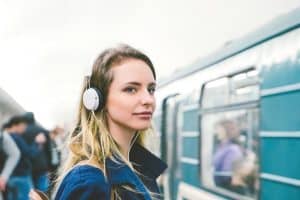 How to approach a woman with headphones without seeming “creepy” and “invasive”?

With all of us increasingly reliant on listening to music or interacting with our phones when we’re out and being plugged into our technology, it is becoming more and more difficult to catch someone’s eye or start a conversation.

How to Approach a Woman With Headphones

On doing a bit of research, it seems that how to approach a woman with headphones has been the subject of heated debate.  A “dating expert” called Dan Bacon wrote a post about it and the debate has been raging ever since!

Here is his take on the post via a podcast interview:

Is It A Bad Idea?

After the blog was posted, there have been many negative comments about how the post encouraged guys not to take “no” for an answer and how Dan Bacon gave them permission to be invasive, creepy and sleezy without thinking about how the woman with headphones might want privacy and would not be interested in any male advances.

People took to YouTube and Twitter to air their views and wrote posts too and also claimed that with the uproar that the original post caused, that Dan Bacon had quickly edited out some of his text:

A post on The Guardian by Martha Mills who suggests that Dan Bacon’s advice, “… is basically “No doesn’t mean no, it means keep going until you get what you want – the screaming will stop eventually”. Because apparently that’s what women want – and forms the basis for a million rape defence cases…”

So guys, we need to tread very carefully in this instance as I’m sure the last thing you’d want to do is upset anyone from the fairer sex.

Is It A Good Idea?

On the other hand, there has been some support for Dan Bacon, he has printed many positive statements from women on his blog to convince us and others have taken to YouTube in support of the article:

So…. Is It OK to Approach A Woman With Headphones?

After reading this post, it could well put you off EVER approaching a woman with headphones!

My personal opinion is that:

then, it is ok to make eye contact, wave in a friendly fashion and say “Hi”.

You will instantly know if any of these gestures are welcome and then you can either walk away, it that’s the immediate vibe you get or stop for a chat if you both want to.

I’d personally prefer to head to Tinder or one of the sites that Tom, from the ThingsMenBuy.com team recommends and spend my time and efforts on finding a hookup or something more, from a woman who also definitely wants to do that too!