What Value Does a Gold Quarter Have?

It is a relatively new creation. A real Gold Quarter has value. If you’re one of the fortunate owners of the 91,752 gold quarters that exist which were issued by the US government, you’ve got in your hand a collector’s item that’s resell-able and which many people are looking for. It’s worth more than its face value.

Be careful because there are gold plated coins parading as Gold Quarters. They are not even worth more than the standard 25 cent quarter that’s US minted. They are sitting on a layer with a thinness of about 0.003 inches of gold, making them next to impossible to sell because they have little or no melt value.

It was only recently when the only officially recognized gold quarter entered into circulation.

We are referring to the Standing Liberty Centennial Gold Coin which was issued in 2016. It has nearly 100% and 24 karat gold content with a 25 cent face value.

It has a W hallmark and has a weight of 0.25 troy ounces on the obverse side. This refers to the location where it was minted (West Point).

The US Mint has only produced 91,752 of these quarters for the Standing Liberty Centennial. 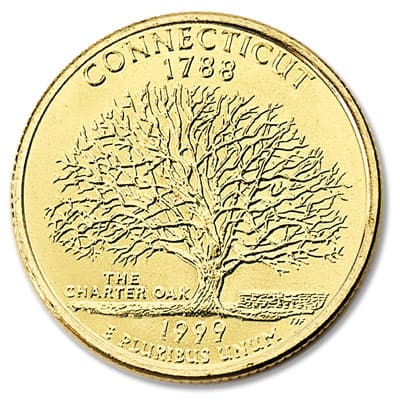 What is the Purpose of a Gold Quarter?

At the obverse (or the heads), what is displayed is Liberty holding a shield and olive branch while she walks through an entrance in a wall with 13 stars.

The reverse (or tails) portrays an eagle which is in flight and flanked by 13 stars.

The Obverse Inscriptions are

In God We Trust

The Reverse Inscriptions are:

What is the Value of a Gold Quarter?

If the coin will have contents of about 0.25 gold ounces, its expected resale value is about one fourth of the value of a 1 ounce gold bullion bar.

During this time, a gold bullion’s spot price is more than $1,750. So it follows that a gold quarter with 0.25 pure gold ounces which is US minted, is worth more than $430 in the aftermarket realm of collectors.

How to Maximize the Value of a Gold Quarter?

It is assumed that it has minimal conditions consisting of a distinctive strike with a complete original luster and with a maximum of three noticeable contact marks (MS-66/67).

But a gold quarter which is in a mint state that is perfect and in circulated (MS-70), which means it doesn’t have any scratches, wear or association with other coins (detectable through 5x magnification), can be resold for 15 to 25% more than its gold weight.

Do You Own a Gold Quarter?

If you think you’ve acquired or have discovered a real gold quarter, find its melt value by using the functions of an online gold calculator. It should be a mechanism which utilizes up to the minute data to compute aftermarket gold market price as based on purity, weight and also bid price.

Since they were originally minted in 2016, the prices of gold quarters have gone up and down, based from the spot price of gold bullion. What follows are the end of year price histories of MS 66/67 condition for Standing Liberty Centennial Gold Coins for the years that they’ve been in circulation.

They have even overtaken the growth of the US Stock Market which grew by more than 56% during this same period.

The real gold quarters are only the ones issued in 2016. All the others are gold plated.

You might hear or read about folks alleging that they were given change with a gold quarter included when they paid for stuff they bought at a supermarket. Or at times, they might be rolling out a stack of quarters, and out comes out a gold quarter.

But we now know, after reading this article, the criteria for that specific coin to be authentic and to have substantial value