Weapon Parts given to the Military by the United States Government 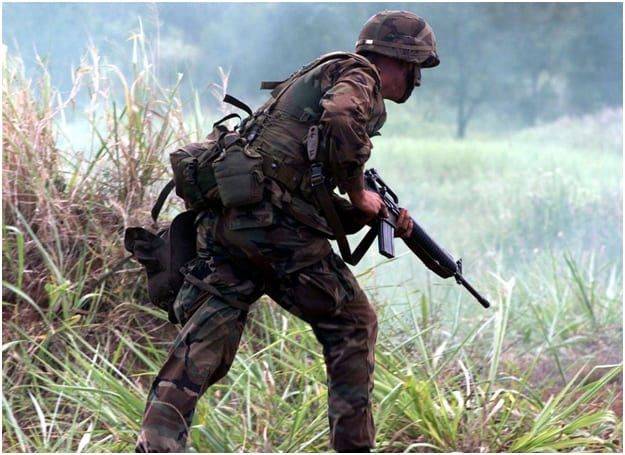 It is no secret that the United States Government’s budget for the military is more than the entire budget of some countries combined. Their continuous testing and addition of new weapons make the United States military the most armed in the world.

This is why a good pistol such as the M9 was replaced with the better M17. Also, the M11 was replaced by the M18. All this is to ensure that the United States Army is well-armed to take on any type of warfare. These government military parts are regarded as standard-issued weapons.

Therefore, in this article, we will be looking at the weapons that are standard issued to soldiers of the United States army.

This semi-automatic pistol sidearm has a .45mm ACP caliber and has been used by the U.S army since the First World War. Recently, it is undergoing a phase-out from mainstream use; hence its service has become limited.

The M9 pistol is a 9x19mm Parabellum semi-automatic pistol that began to replace the M1911 during the middle of the 1980s. It is the standard service pistol but will be completely replaced by the M17.

Just like the M9, the M11 has a 9mmx19mm Parabellum and is a semi-automatic pistol. It served as the M1911 replacement. Now the M18 is its replacement.

With a 12-gauge and a 5-round tube capacity, the M500 is no toy to play with. Soldiers in the US army first received shotguns at the First World War as a method for clearing trenches. As for the M500, it has been issued to soldiers since the 1980s.

The M590 is like the M500 above. Both of them are 12-gauge shotguns and manufactured by Mossberg. They have slight differences like barrel length, triggers, etc. Click here to read more about the M590 and the M500.

This shotgun is regarded as a basic secondary weapon that is hung under an M4. This way, you the user can switch from the 5.56mm M4 to the 12-gauge M26. It can be done so quickly without having to remove your eyes from the rifle or your target.

This battle rifle can shoot 7.62x51mm rounds. Somehow, it has gone through heavy criticism which is why they are being phased out by the army. Its service is now limited and is mostly used for ceremonial occasions.

This gun is the M16A2’s shorter version and can shoot 5.56mm caliber rounds.

The M4 and the M16A2 possess the same muzzle velocity and can shoot the same number of rounds. The major difference is that the barrel of the M16A2 is longer. This assault rifle shoots a 5.56x45mm NATO caliber. It has been phased out and the service is limited. 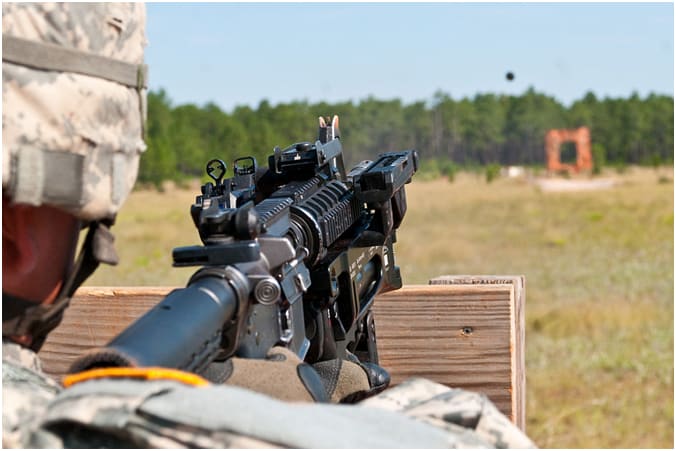 The M203 grenade launcher can shoot 40mm grenades. This launcher can be placed under an M16 or M4. However, the M320 is gradually replacing the M203.

This SAW can shoot 5.6x45mm NATO rounds just like the M16 and the M4. The stand-out differences are its muzzle velocity is greater, it is heavier, and the firing range is greater. Visit https://www.thedrive.com/ to read how the M249 is to be replaced.

Compared to the SAW above, this machine gun uses a belt feed method and has more max range, and it is heavier. It can shoot 7.62mm rounds.

If you’re looking for the M240D upgraded version, then you can find one in the M240H. The amazing feature of this machine gun is that you can mount it on an aircraft or a vehicle.

This SASS designated marksman rifle can shoot 7.62x51mm NATO rounds and has an operational firing range that spans over 2,600 ft. This sniper was set to replace the M14 EBR but is also being gradually replaced by the Heckler & Koch G28.

With the ability to shoot a round of .50 BMG caliber, the M2 is a powerful machine gun with a firing range that has a 22,000 ft. range. It is also quite heavy as it weighs 84 pounds.

This weapon is the U.S army’s latest grenade launcher. The M320 can shoot a 40mm round and you can fit this underneath a rifle. Also, you can use it alone without attaching it. The M203 couldbe used in the same manner, but it is rarely used that way.

Nevertheless, compared to the M203, the M320 is far more accurate. Also, it has better features such as the amazing grips and loading mechanisms at the side.

If you are looking for an automatic grenade launcher with the ability to shoot 40mm caliber grenadesover 7,000 feet and the user may decide to mount it on armored vehicles and tripods, then the MK19 is what you are looking for. Itsfiring range is far better than that of the M320 that reaches just 1,100 ft.

This recoilless rifle system with 84x246mm R caliber has the ability to shoot different types of very explosive rounds. It is powerful enough to take out a wide range of targets and this includes armored vehicles.

The AT 4 is an anti-tank rocket system that was adopted by the Army. It shoots an 84mm caliber making it as powerful as the M3.