The Best Players on the 2002 Miami Hurricanes Football team 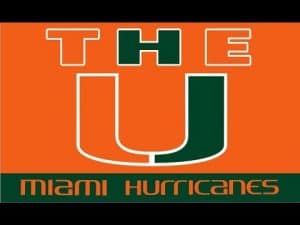 In 2002, Miami had just done a national championship season, some of the players left for the NFL, but a few stayed.  Who were the best players on the 2002 Miami Hurricanes football Team?

Check out Tim’s post on Hurricanes apparel here and on NFL Combine Apparel too. 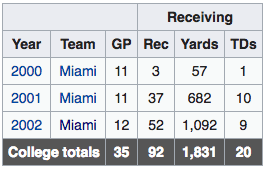 Johnson was a standout wide receiver for the Miami Hurricanes 2000-2002.

Johnson was the number three overall pick in the 2003 NFL Draft by the Houston Texans.

Johnson retired October 31, 2016 and signed a one day contract with the Texans on April 19, 2017 so that he could officially retire as a member of the team.

Dorsey was the team’s starting quarterback and rewrote the Hurricanes record books during his time at Miami.

Even with this strong college career, Dorsey was selected in the seventh round with the 241st overall pick of the 2003 NFL Draft by the San Francisco 49ers.  This was apparently due to concerns over Dorsey’s arm strength.

Dorsey retired on May 3, 2011 after his career included the 49ers, Cleveland Browns and Toronto Argonauts (Canadian Football League).  Dorsey has worked as a scout and also a coach since then.

Vilma played middle linebacker for Hurricanes in 2002. Vilma led the team in tackles with 133 (75 solo), and had two quarterback sacks, a forced fumble, recovered two fumbles, (returning one for a touchdown) and broke up five passes.

Vilma was drafted by the Jets with the 12th selection in the 2004 NFL Draft.  He went onto playing for the New Orleans Saints in 2008 – 2014.  He officially retired in December 2015.  Since then he has worked for ESPN as a college football commentator and studio analyst.

Here’s a Thanksgiving ESPN clip from 2017:

Williams was a linebacker for Miami in 2002, he registered 108 tackles (55 solos) to rank second on the team, notched four sacks, forced two fumbles, and broke up eight passes.

Williams was selected by the Denver Broncos in the first round (17th overall) of the 2004 NFL Draft and emerged as one of the league’s top linebackers.  He signed for the Chicago Bears in March, 2013 after being released from the Broncos.

Romberg was recognised as an outstanding center with the Hurricanes, who he played for from 1999 to 2002.  The Hurricanes won 35 out of 37 games with Romberg as center.

After college, Romberg played with the Jacksonville Jaguars, St Louis Rams and the Atlanta Falcons.  He retired in 2012 and became a host on a morning sports show in South Florida.

Some of the highlights of 2002 include: