Highly regarded as a day of giving thanks and sacrifice for the blessing of the harvest, Thanksgiving Day is a special holiday celebrated yearly in Canada and the United states of America. Taking place in the autumn, it is cherished as an important time for families to gather and enjoy a feast together. Despite these similarities, there are some major differences between the concept and celebration of Thanksgiving between Canadians and Americans. 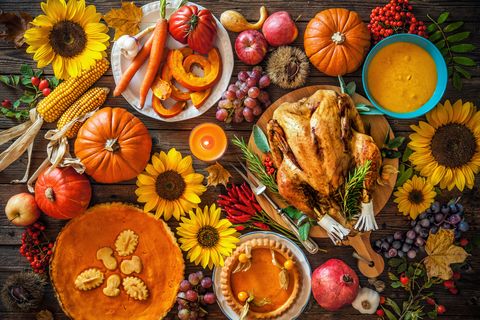 Thanksgiving Day is celebrated on the second Monday of October in Canada. One explanation to this could be that they celebrate it according to natural seasonal shift and as per Canada’s geographical location, harvest season comes first. Although Canadian Thanksgiving formally falls on a Monday, it can be held at any time during the weekend of three days. The big family meal could be on Saturdays or Sundays, rather than on Mondays.

USA celebrates Thanksgiving Day on the fourth Thursday of November each year.  As a result, Americans get both Friday and Monday off.

Historically in Canada, Thanksgiving celebrations commemorated everything from explorer’s crossing of Northwest Passage to World War victories. More emphasis has been given to the harvest, changing leaves, and autumn fruits and vegetables.

The tradition of Fasts and Days of Thanksgiving was introduced in the USA by the pilgrims and puritans who emigrated from England in the 1620s and 1630s. Hence, the emphasis in this country is on pilgrims and the Mayflower ship that carried those pilgrims.

The biggest discount shopping day in Canada is Boxing Day, the day after Christmas Day. In contrast to America, there is no huge shopping day following Thanksgiving here.

Generally, the foods popular during American and Canadian Thanksgivings are fairly similar. In both countries, turkey is the main dish accompanied by mashed potatoes, gravy, sweet corn and other seasonal vegetables. The dessert is where the difference in preparation really shows. In America, pumpkin pie tends to be sweet and is paired with custard. Canadians love to spice up their pumpkin pie with ginger, nutmeg, cloves, and cinnamon.

In both USA and Canada, invites are sent to attend grand Thanksgiving feasts along with friends and family. No one wants to show up empty-handed when invited to somebody’s house for lunch or dinner. A great way to show gratitude is by taking gourmet food gifts for the hosts. During Thanksgiving, the tradition of giving fruits goes back to the earliest recorded history. Premium gift boxes full of organic dried fruits such as dates and nuts seem like a holiday favourite. Offering a plethora of nutritional elements, dates are practically superfoods that have been gaining momentum thanks to the healthy eating trend. The healthier the food, the more the gift will be appreciated by the hosts. As this holiday evolves with distinct cultural factors, it is viewed as a moment to offer thanks, celebrate the season’s bounty, and enjoy a feast with family and friends.