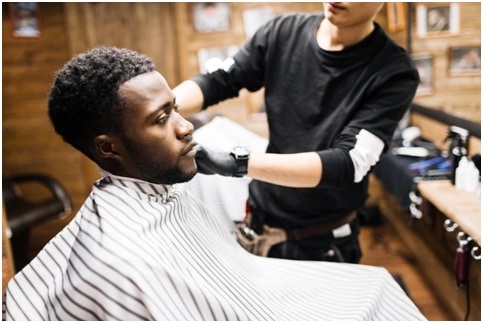 The market for men’s afro haircare is rapidly expanding. While the natural hair movement has long been centered around women, there’s been increased interested in the issues men are facing. Currently, male grooming is a multi-million dollar industry that’s on the rise. Black men have access to a growing range of grooming and haircare products.

There are many haircare products that are targeted towards black men, including lines like Bevel and Aaron Wallace. Furthermore, hair companies and barbershops such as Diligence, Slider Cuts, and NewFade are becoming more prominent. These products are seeing a surge of interest in the United States, the UK, and other parts of the world.

It’s also becoming more common to use hair replacement units for men. In the past, hair transplant surgery and similar types of enhancements were prohibitively expensive, which meant the average man didn’t have access to them. While there were more accessible options, like hair extensions, available, many men weren’t interested in them because they weren’t able to accurately mimic the texture and appearance of textured hair. Now that there’s been more interest in grooming services and products for men, however, the market is beginning to change. Men aren’t shying away from hair replacement units any longer. Instead, men are actively seeking out these treatments.

How Hair Replacement Treatments Have Changed

Today, men have access to non-surgical treatments for hair thinning and loss. This has been made possible thanks to dedicated black haircare professionals that have worked to provide effective solutions to these problems. Thanks to their innovations, there are now hair replacement units that are able to replicate the texture and appearance of natural textured hair.

NewFade was founded by Dr. Joel Akwenuke, who also serves as the company’s CEO. Based in South London, this business offers cost-effective solutions for men that are struggling with hair loss. According to Akwenuke, the low quality of past hair replacement units made them unappealing to many consumers. He’s addressed this issue by creating realistic and stylish hair pieces for men. Thanks to his efforts, the stigma associated with replacement hair units is beginning to fade.

Ace Man Weave Units is a man weave directory which help men find a reputable specialist local to them. They believe that hair replacement units are one of the best options available to men dealing with hair loss. Today’s hair units are very realistic, and the units that are currently offered int the market are also priced very affordably. Most men want to avoid losing their hair. With these units, men have a way to restore the hair that they’ve lost that doesn’t require them to spend a fortune.

Hair replacement units, which are sometimes referred to as man weaves, were popularized in the United States. During this process, hair extensions that mimic natural textured hair are secured to the scalp or head using an adhesive. Once the weave is secured, the extensions are shaped by a barber. The extensions will be cut so that they blend in with the client’s real hair. This is a challenging process, and barbers must be skilled and focused to do the job right. There are many different styles for men to choose from, including classic trims, high-tops, flat-tops, and soft waves that mimic 4a-4c curl patterns in afro-textured hair. Men are able to choose the styles that appeal to them.