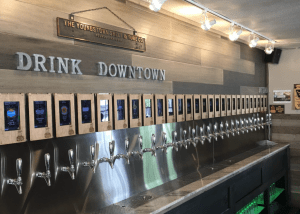 While in Youngstown, OH, I thought that I might be able to find some craft beer downtown. Ohio craft beer. Local craft beers.

I was not disappointed. Not one tiny little bit. You know why not? Because I found the Whistle and Keg.

The Whistle and Keg is not a brewery. They are a craft beer bar with a unique concept. I’ve only seen something like this joint in Alton, IL. The place in Alton is called the Germania Brew House. Germania offers coffee and some other goodies too.

Back to Whistle and Keg 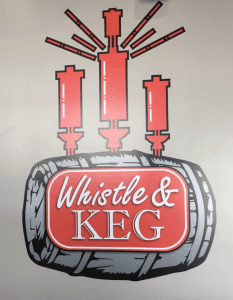 At Whistle and Keg, you walk up a set of steps and along one wall is a long row of taps. By placing the token on your wristband against the designated spot by the tap, the tap is “activated” and you can pour yourself a sample or more of your craft beer of choice.

They had a pretty damn good selection of beers from both Ohio and nationwide. There were even several wine and cider taps for those, shudder the thought, who didn’t want to drink craft beer. 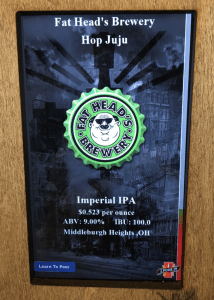 I had a couple of faves. I really enjoyed Fat Head’s Hop Juju. It is an Imperial IPA. Hit me like a flavor bursting, balanced Hop bomb!

Another favorite was Odd Side Ales Rye Hipster Brunch Stout. It had a nice upfront Chocolate flavor but was not overwhelming, it was Creamy, Sweet And Tasty!

After hitting the Whistle and Keg and finishing my gigs and tour in Ohio, I’m back home. Time to start checking out the craft beer scene here on the home front!