Living in South Florida, it’s hard not to be a part of the Miami Dolphins culture.  It’s everywhere.  Sure, people are upset that the team hasn’t had a franchise quarterback since the iconic Dan Marino retired, but that doesn’t mean that the die hard fans have lost any support for the storied franchise.

I live in the suburbs of Fort Lauderdale presently, in an affluent area where many celebrities and athletes that have families live.  It’s a very safe, upscale, beautiful community where the crime rate is as close to zero as I’ve ever seen.  There are only a few local bars, and the most popular one for the business savvy crowd is called Smoke on the Water, a cigar bar located in the center of town.  It’s very common to see athletes from every era enjoy the peaceful atmosphere and gigantic cigar collection that the location provides.

Being a fan of all major sports, this is a pretty cool thing to experience.  I’ve had beers with more football players than I can remember, and it’s a place I frequent during all major sporting events.  There was even a time when there were three NFL Hall of Fame Members at the same exact time just on a random Sunday.  Let that sink nin for a second.  That is a very rare happening – three of the best players in the history of a sport, all being at the same place, at the same time, without some major event going on that made them be there.

Sure, there are more upbeat bars, but this one just has a certain vibe to it that makes it feel like home. 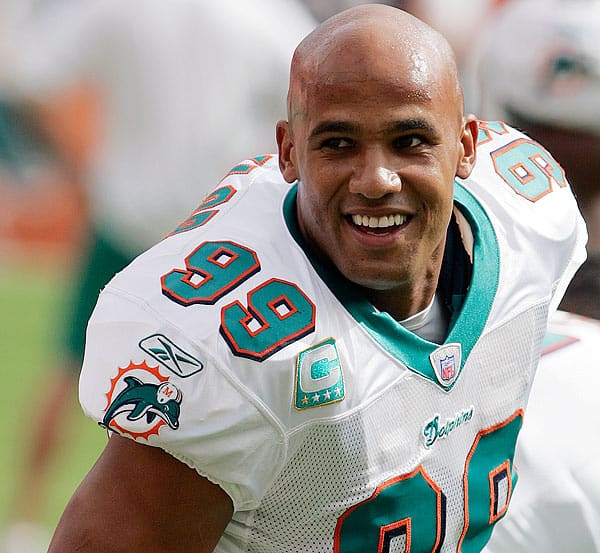 One legend who happens to be a cigar aficionado is Miami Dolphins great Jason Taylor.  Taylor is the epitome of a role model, being the face of the franchise for his tenure in Miami.  He holds many Miami Dolphins defensive records and is one of the most well liked players the franchise has ever had on their roster.  As a South Florida resident, he’s out in the community with his charity quite often and is quick to say hello to appreciative fans.  He’s a Miami icon, forever.

Jason talks about the thrills of being a Hall of Famer in February of 2017.

Taylor was inducted into the Pro Football Hall of Fame and will give his speech in Canton, Ohio.  He’s one of the very rare first ballot Hall of Fame players, which says how much he impacted not only Miami Dolphins fans, but fans of pro football in general.

Jason’s speech lasted about 32 minutes.  It was one for the ages.  He recognized dozens of the people who helped him along the way, and had a very heart warming message for his family members who were in attendance.  He honored his Mother, as well as his agent, among many others.  He choked up several times during his speech and left an impact on many people when he talked about the joys of being a father to his three children.

The NFL has disabled embedding of the video of his speech, so you can view it here.

Other notable statistics include:

Taylor won numerous awards playing with the Miami Dolphins, including:

He was the NFL Defensive Player of the Year in the year 2006 and a six time Pro Bowl Selection.  His laundry list of awards and accolades is so extensive that it’ll almost look boring to visitors here.  Just know that he’s one of the best football players of All Time, and more importantly, a solid guy off the field.