I came across these game used baseball cufflinks and was so intrigued. Let’s face it, there is nothing better than having some kind of clothing or apparel revolving around your team that you know your buddies don’t even know about. Something that makes them know that your passion for your team makes you a “real fan”. That’s what these cufflinks are. The first time I heard about them, I knew I had to find out more.

Now normally a pair of cufflinks are about as interesting to me as an old piece of gum, but these definitely have something else to them. They are made from real game balls that have been used in Major League baseball games. The cufflinks are actually the stitches of the baseball that have been cut out. The stitches are set in sterling silver, giving them a perfect balance of game worn elegance. 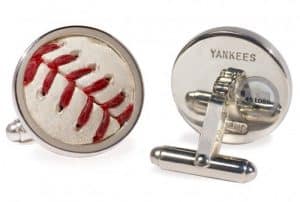 Each pair comes with a hologram number verifying their authenticity and your team engraved in the sterling silver. You can even go online and search the number and find out everything there is to know about the game the balls came from that were used to make your set of cufflinks.

Talk about a conversation starter! I remember the episode of Seinfeld where Jerry had an old pair of Jerry Lewis’ old cufflinks that he was going to use to start up a conversation. Now imagine having a pair of game used baseball cufflinks from a game that had a no-hitter. Or the game the Yankees clinch the pennant!

When I was looking these cufflinks up I saw even more goodies that I have to get my hands on. There are the hockey stick and baseball bat bottle openers. Game used base stools where the seat is actually a base that was used in a real game. Imagine having a man cave and at your bar, there are stools where the seats are real bases from actual Major League games. On top of your bar, you have a bottle opener made out of a real game used bat from your favorite team. These are touches that not many people can have to their man cave. 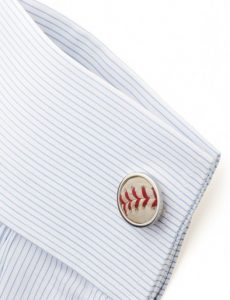 But first things first. I need to get my hands on a pair of Yankees game used baseball cufflinks! I need to research the game they were from and know it inside and out. So anytime I wear these cufflinks I can tell people all about them. I really don’t think anything says you’re a ginormous fan quite like a pair of game used baseball cufflinks from your favorite team. Check them out!

Have you seen anything this unique revolving around your favorite sports team? Share in the comments below!