It was only a matter of time. It started several years ago. How the hell am I supposed to know what’s going on? Is my craft beer really craft beer? Is “Big Beer” playing me for a sucker? 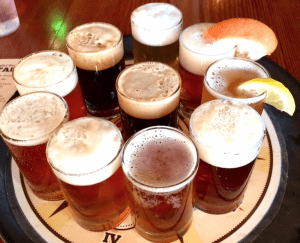 These craft brewery acquisitions are confusing the hell out of me.

Being the craft beer freak that I am, I do more than just drink as many of these divine brews that I can get my greedy giant hands on as often as possible. Sure, I knock back a man-sized number of tasty crafts. No argument there. Obviously, I write about craft beer too. The proof of that is in these words blipping across your screen. I also try and keep up with craft beer industry news. I like to at least think I’m informed about what’s going in the world of tasty adult beverages that I love so much.

Here’s the skinny: That craft beer you’re drinking may not be craft beer! What? How can that be?

Now, there are those who want to toss that into the trash because they are selling out and want to validate their greedy actions. Yeah, that last sentence is my opinion pure and simple. However, I’m not flying solo.

So, check it out. That’s right. Big Beer has and is moving in. We’re looking at craft beer m&a. That’s mergers and acquisition of craft breweries by beer behemoths like AB InBev and others. 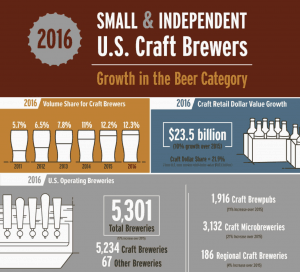 Giant beer companies are buying up craft breweries so they can get a piece…a growing piece …of the craft beer business. Craft beer has been growing and expanding while big beer brands are stagnant. So here comes Big Beer swooping in with piles of cash to get in and then cash in on the craft beer phenomenon.

If you look at it from a dollars and sense point of view, the craft beer segment is worth a lot and has a remarkably large portion of the beer business. Last year, craft beer accounted for almost 25% of total beer sales in the US. That’s $23.5 billion dollars in craft beer sales. The total economic impact of craft beer last year was $67.8 billion. As you can see, we’re talking major, massive, huge moolah! No wonder Big Beer is flashing the cash around to get in on the action. They live for market share!

Looking at it from the Brewers Association definition, once a craft brewery is bought out completely or sells more than a 25% stake to a big brewery they cease to actually be a craft brewery. They also cease to be independent so that is strike two against them being a craft brewery.

Here’s where it gets shitty. The craft brew sellouts don’t want you to know that they have sold out. Craft beer drinkers relish the idea and reality of independence. We root for the little guy. The local folks with the balls to make their own beer and put it out there for all us lovers of beer with flavor. Because they have taken a bite of the big beer financial apple, they have gone against the very basic, the very foundation of what craft beer brewing is all about. And they don’t want you and me to know about it because they don’t want craft beer drinkers to know that they are now buying beer that is part of the Big Beer empire.

The sellouts are committing lies of omission. If you dig around, you can find out this has been

happening. The sell out companies are not coming out and telling the craft community that they have sold out. They want to keep it on the down low and pretend like everything is the same as it has ever been.

The owners of the sell out companies are also trying to qualify their actions by, when they are called out, saying that we can do so much more with the money or that the beer is the same and we can do things even better now with all the money or whatever.

Hey, I’ve blabbered about this long enough…for now. If independence is important to you, then you know what to do. If the only thing you care about is just having a tasty beer no matter the behind scenes shenanigans, well that’s up to you.

For those that care, the following US breweries are no longer true craft breweries because they have sold out: Goose Island, Kona, Omission, Red Hook, Widmer Brothers, Blue Point, 10 Barrel, Elysian, Golden Pond, Four Peaks, Breckenridge, Karbach, Devil’s Backbone, and Wicked Weed. There may be others and there may be more.