What Are The Best Brands of Vodka? 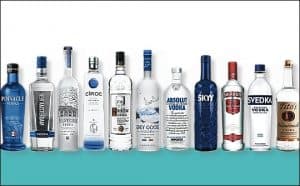 Here at ThingsMenBuy.com, we have a range of adult beverages that we enjoy.  What are the best brands of vodka to add to the best vodka cocktails?

Many traditional vodkas do not have a specific taste, but these days you can get a modern twist on vodka with all sorts of variations.

What Are The Best Brands of Vodka?

Top Ten Best Selling Brands of Vodka in the World

The biggest vodka brand in the world and the best selling one too.

The Smirnoff vodka distillery came to life some time in the 1860s through Petry Smirnov in Moscow, Russia. Smirnoff undergoes a triple distillation.

Smirnoff Red Label is the best selling vodka and comes in at 37.5% strength.  It has won many awards including a double gold at the San Fran Spirit Championship.

Black Label is 40% strength and is a good one to serve neat and frozen.  Blue Label is 50% strength for an extra kick and is charcoal filtered too.

Smirnoff also do a massive range of flavored vodkas for you to sample.  Some of the flavors are disgusting (in my humble opinion!) Do you really want to admit that you are drinking Fluffed Marshmallow or Kissed Caramel vodka?!

Personally, I’d rather buy the pure, classic vodka and use it to make a classic cocktail, my particular favorites are Bloody Mary for a refreshing, spicy tangy drink or a Moscow Mule – I love the ginger kick of this one.

If you must have flavored vodka, I’d recommend the lime or raspberry which I might occasionally be tempted to drink,

Absolut is a Swedish vodka (1879), it came to the US in 1979 and again does a wide range of flavored varieties.  Absolut are masters at branding and advertise themselves as ‘starting a revolution in cocktail creation’ with their innovative flavors. They have distinct bottles, that have a certain ‘pure’ look about them, Absolut has a good taste which is very acceptable to the palate.

Khortytsa is a Ukrainian vodka which is produced in a modern distillery.  It joined Drinks International’s Millionaire’s Club, ranking among the world’s top 3 largest selling vodka brands in 2017, so is one to watch out for.

Other best selling brands of vodka worth a mention are:

At last a vodka from the US, have a look here at our in-depth review on this home-based vodka.

Mojo.com has some alternatives in their Top Ten – their number 1 is Stolichnaya, which comes in at 40% strength and is another Russian vodka (1901).

There are so many vodkas to try, it could take a very long time!  For my bucks, I like the classic, pure vodka with no strange flavors added!  My personal favorites are Smirnoff and Absolut.