As men, we often strive to acquire things in life. I’m no exception to that rule. In fact, I’ve been trying to become the million dollar man that I’ve set out to be. Easier said than done. However, some people have had the pleasure of acquiring serious wealth. In doing so, they’ve been incapable of maintaining an intimate relationship with others. That’s why Established Men and WealthyMen exist today.

They’re dating networks that help rich bros find girls to hook up with. Is it a shallow move? Presenting your wealth in the name of having an online booty call? Perhaps, but who cares. If you’ve got it, then flaunt it.

I mean really, how many women out there use ALL their assets to meet men? Well, isn’t it only fair that men do the same, especially when they’ve got Lambos, yachts, and cash in the bank?

I took the time to play the rich role (because I’m not all that far off from it, and here’s what I learned in doing so… 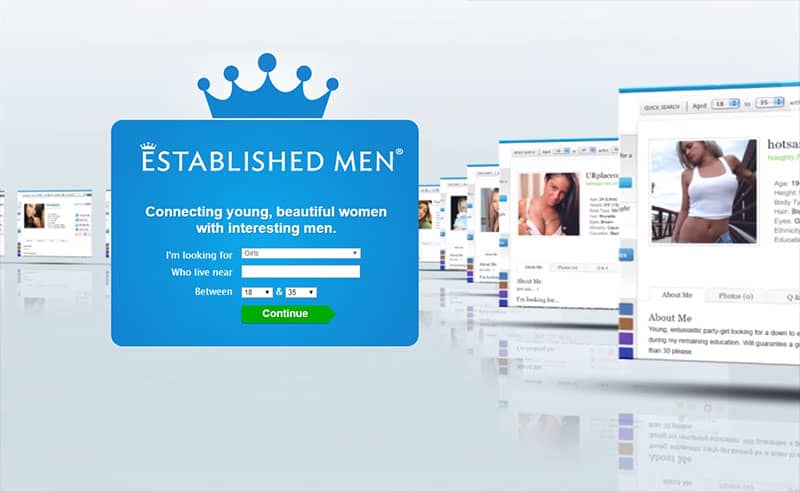 The Established Men Experiment – My Findings

Established Men caters to a very specific demographic and, if you happen to not be a part of it, then you can’t really use the site. It’s an exclusive dating network for wealthy men to use in order to find women. These women are more often than not, looking for the kind of financial support that comes from having a sugar daddy or rich spouse.

If you’re a breadwinner and hustler like me, then you’ll appreciate this. It’s an easy way for people who work a lot and don’t have a whole lot of free time to try and set up casual encounters or search for long-term partners. It sounds like it works on paper, but there are more than a few frustrations to deal with along the way.

Getting into the site and setting up a profile is pretty easy. You’ll have to answer questions about your income level and profession, but that goes along with a site like this. While you can browse through a few profiles without paying, if you want to actually use the site, you’ll have to pay a monthly fee.

It’s a lot higher than most of the better premium dating sites, but once again, it’s for wealthy people and it’s more proof that they have money to spend than anything else. The site just happens to benefit from it.

You can also verify your income by providing the site with financial documentation required. It’s not 100% necessary but it might help improve your chances of hooking up. I didn’t do it but if you do, this will give you a badge on your profile. Said badge lets other people know that what you claim to make each year is accurate AF.

Trust me, bro, these are the profiles that will get the most attention. Simply because there’s no chance of being surprised when you finally get together. Girls want paper and penis, Nuff said. A woman who’s specifically looking for a rich man will go for the one who puts his money where his mouth is every single time. That’s definitely something to keep in mind when you’re making your decision.

The main issue I have with Eastablishmen.com is that you’ll have to deal with a lot of fake messages from bots. I did some digging and truth be told, it’s not clear whether they come from the people who run the site or third party companies.

Whatever it is, know that someone might be trying to spam you, it happens quite a bit. Some of them are good enough to fool you into responding, but the cover is typically blown when reading the second message. A lot of sites out there use this type of approach and it’s one that I don’t condone. Especially with the high price of admission, it seems totally unnecessary here and even a little underhanded.

Of course, as was just stated, it’s not clear where they come from, so the site itself could be totally innocent of it.

The women who use the site seem very interested in meeting men. At least that’s my take on it. They want to meet up and start something with you. I’m not entirely sure whether that means you acting as a sugar daddy or just a quick fling date. My guess is that money is involved somewhere along the way.

How you use the site is totally up to you. You’ll be able to find someone no matter which course you take. The site is free to make its own rules and act however it wants, as long as everything stays safe for the members involved. At the end of the day, you’re both adults and free to make whatever decisions you want. If you want to trade a nice dinner and goodies for a date with a hot DTF girl, then good for you!

I like the fact that everyone is pretty upfront and honest about their intentions here. Gifts, dinner, money and all for time or sex. Seems totally reasonable if you’ve got a fat wallet. You know what you’re looking for just as much as any girl on this site. That alone always makes for a better experience.

If you decide to check Established Men out, let me know how you like it. If I were you, I’d opt for some of the top 5 hookup sites before this one. But that said, it’s one that just might work for you. If not, there’s always the competing site called Wealthymen. I got laid using that too.