What up homie? I’ve got something serious, but fun to talk about today. As you may know, I’m a guest writer here on TMB and I share this information because I think the site’s pretty badass. However, I’ve got to get my serious face on because today I’m sharing a review on a dating site that makes me want to vomit. NO LIE. The site is called, NSAFinder. 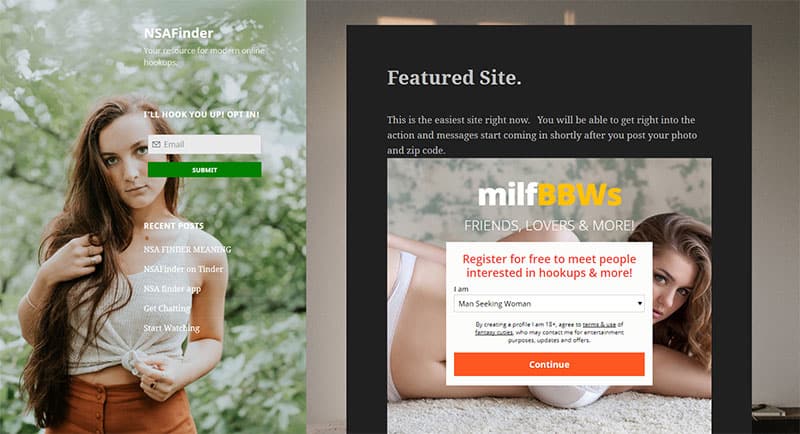 Now lots of people have become confused over the last few months with what NSA actually means, so I’ll start there.

What It DOES NOT Mean: National Security Agency

What It Does Mean: No Strings Attached

The term no strings attached basically means that you’re looking to form an adult dating relationship with someone and without forming any type of emotional bond. Get the jist of it here? Great, now time to move on to the shady things that NSAFinder.com does to scam people.

As you can tell, I’m not a big fan of this site. In fact, NSAFinder is a site that you’ll want to stay far away from at all costs. I’m sure you’ve heard of it, but if you haven’t, I’ll fill you in as much as I can before I melt into a puddle of internet rage over just how useless this thing is.

I know I covered it above, but I’ll do it in more depth here now. Let’s talk about what NSA means. Maybe you already know (if you read from the top down), maybe not, but I want it on your mind as we talk about this website. The acronym stands for No Strings Attached, which is a great kind of temporary relationship to find yourself in.

I’m frequently in NSA relationships. In fact, I’ve been in plenty of them myself, and they’re a lot of fun. You get to have a ton of casual sex. Oh, and without all of the talking and emotions that come along with a real relationship. The important thing to note here is that this site has nothing to do with NSA.

The Scam From The Start

How can you tell? Simple, you can figure it out in your first thirty seconds of viewing the site. Not only are they not providing you with a dating app or site, they’re not even bothering to hide that it’s just a skin. To the person without any industry knowledge, they think it’s just a site to attract hot moms, but it’s so much less than that. It’s simply a snippet of code that’s been applied to the site to generate that form you see.

You’ll just be a little bit lighter in the wallet area. Don’t let your curiosity get the better of you. They don’t deserve to be making money this way.

Now that that’s out of the way, let’s talk about NSA sites in general. They’re great! I use them all of the time and I’m always extremely happy with the results. Men like me aren’t the only people who like sex. Women go for the quick wham bam fun time too. In fact, they crave it just as much and there are specific hookup sites that they go to.

Check out all the sites I’ve praised on this page here. Not only do the responses tend to come quickly, but they take almost no work at all. As long as you have some pictures up to get their attention and a slick bio, then all is good in the hood and you’ll eventually get lucky. Like I said are plenty of good NSA sites out there that you could be using. Find those instead of this dumpster fire.