What is a Flaming Lamborghini? 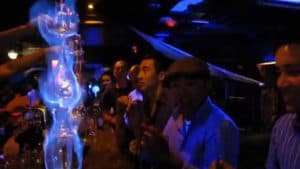 I was first introduced to it when I was travelling around New Zealand, I met some friends and went for some apres ski in Mount Hutt, NZ.  A lot of the bars we went to did a flaming lamborghini and, of course, we tried one (well, actually several!)

What is a Flaming Lamborghini?

Here’s the Tipsy Bartender’s take on this wondrous drink:

It’s basically a cocktail that is set alight and it’s meant to be drunk in one, with a straw (so that you don’t burn your mouth!)

What Is A Flaming Lamborghini Recipe?

You need only four ingredients to make your show stopping flaming lamborghini.

How To Make It:

That’s all there is to it!  The Tipsy Bartender’s instructions above are to make a tower of the cocktail, which you can Wow your guests with.  Alternatively you can just use one cocktail glass and two shot glasses, like the recipe above.

Trip Advisor suggests you head to Iluze Bar in Prague to try a flaming lamborghini or Isa’s Bar in Turkey.  Alternatively, you could head for Bangkok and visit The Myst Bar

What Is A Flaming Lamborghini Alternative?

There are a variety of flaming cocktails you can try, here’s a selection from The Matador Network’s Top Ten:

Be careful though guys, flaming shots can obviously be dangerous AND they are mostly very alcoholic, so don’t expect to be able to walk a straight line on leaving the bar!

Flaming cocktails can be a great idea for a Bachelor Party, check out these ideas for great bachelor party venues: