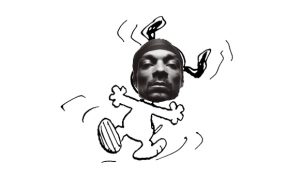 Snoop Dogg (real name – Calvin Cordozar Broadus Jr.) has been around a long-time in the world of rappers.  With that in mind, let’s check out the Snoop Dogg Net Worth in 2018.

Snoop Dogg got his stage name from a his nickname ‘Snoopy’ which his parents gave him when he was a kid.  (Apparently he looked like Snoopy!)

As you can see, the resemblance is uncanny!

Snoop Dogg Net Worth, as of January 2018 is $135 million, which makes him one of the richest rappers in the world.

In 1992, a mixtape featuring Snoop Dog was handed to Dr Dre, who was impressed … and Snoop Dogg has been around ever since! (FYI, Dr Dre has masterminded many rapper careers and his net worth in 2017 was $740 million).

He’s had many massive hits, here’s one of them:

According to Forbes in 2016, Snoop Dogg Net Worth made him their #10 in the top earning hip-hop acts of the decade.

Snoop Dogg not only makes megabucks from his songs, but also cashes in on various advertising contracts.

Here’s a hilarious Super Bowl ad for T-Mobile with Martha Stewart, who he also did a TV series with:

Snoop Dogg has long been known for his love of marijuana and he launched, what he calls the first mainstream cannabis brand in the world – Leafs by Snoop, in November 2015.

Whatever your opinions on weed, our loveable Snoopy is funny, chilled out (is that all the weed?!) and loved by many.

Snoop Dogg’s longevity and ability to build his ‘brand’ have proved extremely successful and contributed to the Snoop Dogg Net Worth machine.

Check out Dave’s post on Dr Dre getting ripped.  Dr Dre transformed his body – he says through going to the gym two and a half hours Monday to Friday.  Other opinions are that maybe he used steroids.

As we know, Snoop Dogg would much rather enjoy a high quality weed – after all, he is a self-professed connoisseur in that area!

Love him or not, Snoop’s brand is a chilled-out character who comes across as funny, relaxed and cool.  A heady combination which has secured him a massive fan base.  This fan base makes sure that Snoop Dogg Net Worth continues grow as the years go by.

If you love dogs, make sure you check out our HungryBark.com review.  It’s the latest dog food brand.  I think Snoop Dogg needs a dog food brand!