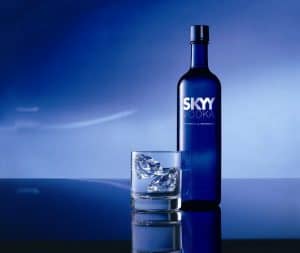 We’ve explored the best brands of vodka and vodka-based cocktails.  I thought it would be fun to find out the history of Skyy vodka as it is a relative newcomer in terms of good vodkas and one of the few that is made in the US.

Skyy came to be in 1992 and was created by inventor Maurice Kanbar.

Skyy vodka was originally produced and bottled in San Jose, CA.  The ethanol used to produce Skyy was delivered by rail from Atchison, KS. In December 2001, the Campari Group bought Skyy from Kanbar.

Skyy vodka was invented by Kanbar allegedly because he wanted a better martini and he decided that a premium martini needed a better vokda.   So, in 1992, Skyy became America’s first quadruple distilled and triple filtered premium vodka.

In fact Kanbar has become known for his quest to create premium vodka and, since Skyy he has also created Blue Angel Vodka, which is purer than Skyy.  Kanbar’s latest vodka even has a martini all to itself – the Blue Angel Martini (BAM), which is simply Blue Angel vodka and vermouth.

Skyy vodka has a variety of infusions available and the list is ever growing.  As of 2017, these infusions were available:

According to Skyy they have a developed an infusion process that captures the true flavor of the fruit, the “true-to-fruit experience”.

More About The History of Skyy Vodka’s Inventor

On delving into the research for the history of Skyy vodka, it became very evident what a fabulous inventor Maurice Kanbar is! Here’s some interesting facts about him: