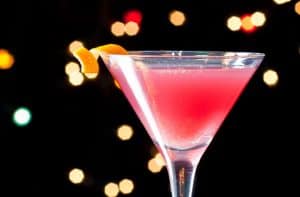 The Cosmopolitan has become a very popular cocktail due to a certain HBO show, what are the best cosmopolitan recipes for us to sample?

Let’s take a look and find out which are the best.  It’s difficult to tell you when the Cosmopolitan was invented, even Wikipedia isn’t certain! Though we all know it became popular in the ’90s through that HBO show (I’m guessing you realise I’m talking about ‘Sex in the City’?)

Here’s the classic recipe from TheSpruce.com:

Tip: No matter which Cosmopolitan you choose to mix up, this is the time to break out the good vodka.

Or this one adds simple syrup, if you want a sweeter cocktail.

Shake and strain into a coupe glass. Garnish with a lime wheel.

#3. Varieties on a Cosmopolitan

Due to the Cosmopolitan becoming so popular in the ’90s, this adult beverage also gave rise to some interesting variations.  There were many bartenders out there who added their own twist to the Cosmo.

Here’s a couple of other recipes you might want to experiment with:

1.5 oz citrus vodka
1 oz Cointreau orange liqueur
0.5 oz fresh lime juice
Splash cranberry juice
0.5 oz white peach puree
Prosecco sparkling wine
Save the Prosecco until the you’ve shaken all the other ingredients and add it at the end.  This one resembles a hybrid between a Cosmo and a Bellini!

In both of these, you’ve guessed it, the cranberry juice is substituted for either fresh strawberries or raspberries, whichever you prefer.

If you decide the Cosmopolitan isn’t for you, check out our other vodka-based cocktails ideas at your local or home cocktail bar.